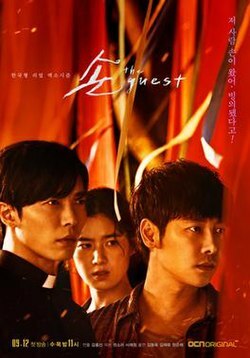 Streaming giant Netflix is making sure that fans are spoilt with choices with all the back to back Korean series that will keep you hooked!

Witness The Horror Fest In This Korean Series, The Guest Season 1!

Netflix recently released a brand new Korean series titles The Guest, the first season has been gaining positive reviews and let’s just say this guest is not the normal ones and refuses to leave after a while! The horror series follows around a mysterious past that bounds three people, a priest, a detective and a psychic.

If you haven’t already seen the series yet, here’s the official trailer of the horror series The Guest. While it will manage to send the chills down your spine, there’s more to it as it is bound by a tragic past. The trailer will help fans get a bit of a glimpse of all the spook fest that is in the forts season itself.

Three People Are Bound By An ill Fated Past In This Gripping Korean Horror Series!

Bound by this tragic past, these three join hands to take a powerful spirit who is driven by his thirst for blood. The tipping story has been appreciated for its pace which might seem a bit slow at first but soon takes us on a ride of horror and thrill!

With the demon starting its atrocities even after so many years, the three characters find their way back into the loop. While the streaming platform has not disclosed  any renewal plans for this horror series  yet, we surely would want to see more as the first season finale left behind a big question mark behind. The Guest is currently streaming on Netflix.

This is all GAY Guys have Learned from their Relationships!!! What To Do and What Not???
Korean Series Sweet Home Season 1 Left Behind Too Many Twists , Hinting Towards A Possible Second Season!