WHAT!!! Singer Sia wishes and is trying to be a part of the lavish Kardashian family! And Kim Kardashian has become the Matchmaker! 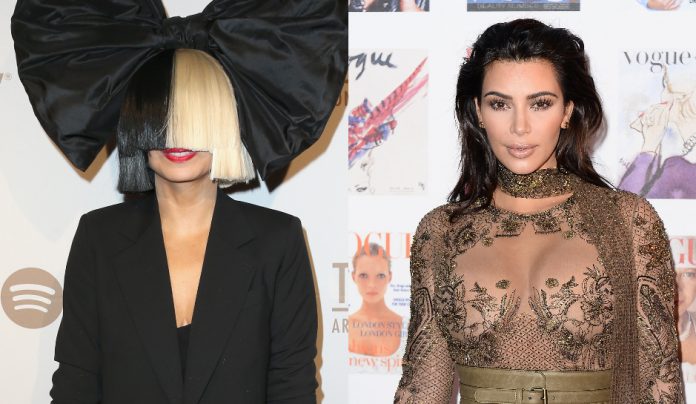 Blockbuster Australian singer Sia talked about herself trying to be Kardashian at the Christmas party thrown away by the lavish family.

Sia performed her chart-busting song Chandelier and some picked up songs from her Christmas album, Everyday is Christmas. Entertaining the guests with her songs like Cheap Thrills and Snowman, the singer managed to make herself to the Instagram story of Kim Kardashian.

In the spur of the moment, Sia mocked, “There are so many ways… I didn’t realize there was more than one way to become a Kardashian.” She went on to say that that’s obviously what she’s trying to do.

Kim Kardashian immediately added to the comment dragging her brother Rob in the conversation. She teased that Rob could marry Sia to make her a Kardashian and hence fulfill her wish.

The singer’s outfit for the party

While performing in a large gift box, Sia wore a red and green wig that covered her eyes. The look was carried by a red mini dress with different shaded bows all over it. The singer also wore a large bow at the very crown section of her head adding to her appearance. A dancer alongside wearing a similar wig all together joined the singing thus completing the performance.

Kourtney Kardashian hosted the big party this year at her $60 million compounds which costed roughly a sum of $1.3 million. Kris Jenner,64 had always held the party until last year when Kim hosted the KarJenner Christmas Eve party.

The Australian singer and songwriter reached everyone’s hearts with her songs like Unstoppable. The Greatest Alive and many other creations blew the 44-year-old singer straight to fame.

Previous article
DEMI LOVATO SURPRISES FANS WITH ANOTHER NEW TATTOO HAVING ANGEL AND DOVES!!! AND IT’S GOT A VERY DEEP MEANING!!!
Next article
Wanna be fit and healthy this New Year? Give a try to intermittent fasting. Read to know what experts say about it.