Thomas Ravenel is bragging about his parenting skills after a custody battle with Kathryn Dennis!! 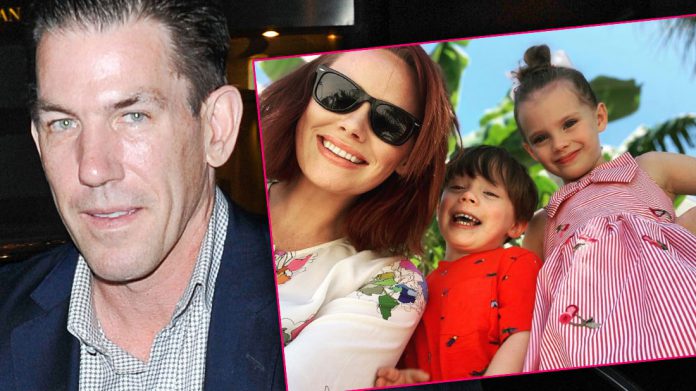 Former Southern Charm celeb Thomas Ravenel said that his children are “thriving” after a custody clash with his baby mama Kathryn Dennis.
The ex-couple were struggling into the court for about a year and finally ended it with a pact last month. The two hold the joint custody of their kids and Thomas remains on top as the major custodian.

Natively belonging to South Carolina, Thomas told Radar Online that he is very pleased as custody agreement has been reached. “The kids are thriving and I’m pleased with it,” he said. He further looks positively for a brighter new year.

Thomas posted a string of pictures with his children Kensie,5 and Saint,4 on Instagram after winning the battle again Kathryn. He often brags about his parenting capabilities along with the snaps. Ravenel captioned a pic of Kensie in pink coat and Saint in blue one as he got his kids ready for school: “And as unbelievable as it sounds I get them ready all by myself and I feel I’m getting good at it but I think it’s time Saint got some cuter clothes.”

Court has restricted the parents from getting Kensie and Saint watch Southern Charm until they are thirteen. While Kathryn continues to be a part, Bravo dismissed Ravenel from the show in 2018 when two women charged him for sexually assaulting them. Thomas fought the case along with handling the custody case against his kids’ mother Kathryn.

The man, being guilty of charges against him, pleads for compensating the victims and not getting imprisoned. Both Thomas and Kathryn keep posting regular pictures of their children over social media.

Previous article
Looks like PewDiePie is tired of all the social media pressure which is building around him
Next article
Beauty with Brain: Doctor Camille Schrier wins the title of Miss America 2020!!