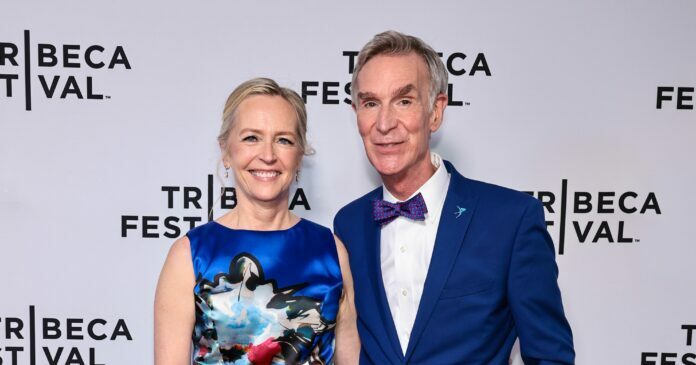 The Science Guy Bill Nye is now a married man! The journalist Liza Mundy introduced the popular science teacher to chemistry, which is unlike anything he has ever lectured about!

According to People, the pair exchanged vows in the Haupt Garden of the Castle Building at the Smithsonian Institution in Washington, D.C., before the end of May 2022.

Robert Picardo, who plays The Doctor on Star Trek, presided over the exclusive and private wedding. A source referred to the couple’s personal vows as “equal parts poignant and hilarious.”

The engineer wore his father’s cufflinks, which had little blue stones in the center, on his special day. The New York Times bestselling novelist and former Washington Post writer wore a satin sleeveless mermaid gown while walking down the aisle, accessorized with a beaded belt that complemented her vibrant bouquet.

The newlyweds celebrated at a celebration that was overflowing with heartwarming sentiments after they were declared husband and wife. The pair received poignant toasts of congratulations from Darby, Nye’s brother, and Mundy’s daughter, Anna. By donning glittery sneakers, the bride improved her wedding attire. The newlyweds moved to Sam Cooke’s version of “What a Wonderful World” for their first dance. Every exquisite moment of their special day was captured by White House photographer Pete Souza.

The couple first corresponded over email before getting married. Nye couldn’t help but get in touch with Mundy after learning that she had featured his mother, Jacqueline Jenkins-Nye, in her book Code Girls: The Untold Story of the American Women Code Breakers of World War II. The two became friends over their shared love of knowledge and storytelling, and the rest is history. We are overjoyed that these enquiring brains have discovered their soul mate!