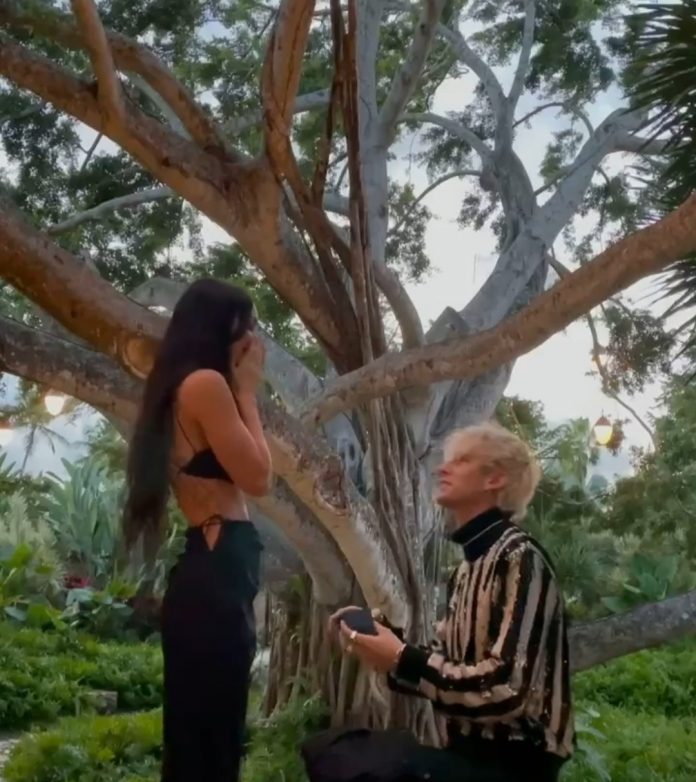 The new love birds Machine Gun Kelly and Megan Fox are enjoying their life as the duo announced their engagement week back. But it’s not the couple’s engagement that’s grabbing the attention, rather it’s Megan Fox’s engagement ring that’s in limelight these days. But what’s so special about her engagement ring?

Well, read ahead if you really want to know the mystery behind the beautiful engagement ring worn by the actress Megan Fox.

Megan Fox’s engagement ring has an interesting story behind it

The Transformer actress got engaged to Machine Gun Kelly recently. However, while talking to the Vogue some days back, the couple revealed some interesting yet shocking facts about the engagement ring.

The beautiful ring worn by Megan is actually intricately designed with two stones in it. The ring has one diamond and a green emerald in it. Kelly went on to reveal that the engagement ring is basically two rings joined together with a magnet to it that brings both the diamond and the emerald closer to each other forming a heart.

In the Vogue interview, Kelly confirmed that he specially got the engagement ring designed with Stephen Webster who’s a British jewellery designer.

Kelly shared with Vogue that the green emerald is the birth stone of Megan and the diamond is his birth stone. Both the stones have been put together to fit in as one ring making a heart like shape.

See also  Hannah Brown wants to focus on 'Dancing with the Stars '! The star skips the question on her role in Demi Lovato and Mike Johnson's love life!

He further revealed that the stones of the ring have been carved into a teardrop shape and the emerald used is in it is in its pure form. The ring worn by Megan is beautifully designed to break into two rings. However, the ring becomes one as it gets attracted by the magnet in the ring.

Interestingly, Kelly said that the bands of the ring are actually thorns that would hurt her, if she tries to take it off her finger.

Also read: THE ACTUAL REASON BEHIND JASON MOMOA AND LISA BONET SPLIT- IT DID NOT JUST HAPPEN OVERNIGHT! READ ALL ABOUT IT

See also  Jeffree Star Reveals it all! The Dark Side of the faulty relationship with Nathan Schwandt