Las Vegas turned lucky for Jennifer Lopez and Ben Affleck!! The couple is back and happily married!! 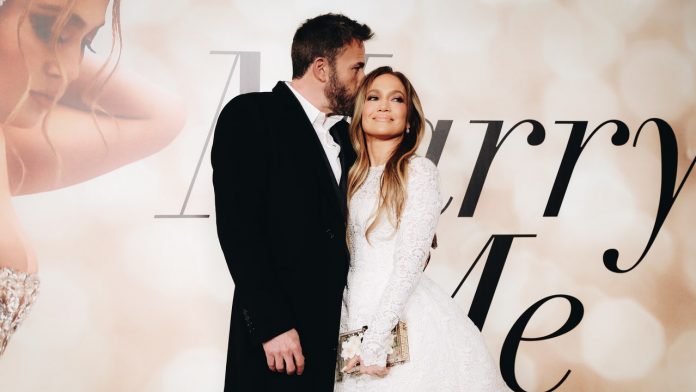 Ben Affleck and Jennifer Lopez, a famous couple, have been wed legally in a drive-through chapel in Las Vegas.

The couple’s marriage was revealed by Lopez on Sunday in her fan email under the heading “We did it.”

“Love is lovely. Love is nice. And it turns out love is patient. 20 years of perseverance, “Lopez sent a telegram bearing Jennifer Lynn Affleck’s signature.

The famous power couple’s nuptials in Nevada marked the culmination of a relationship that spanned two separate romances over two decades and made numerous tabloid covers.

The traditional Vegas wedding ceremony takes place three months after the pair announced their engagement and 18 years after they postponed their nuptials.

The singer couldn’t stop gushing about how “wonderful” her restored relationship with the actor has been and how they are both having the “greatest time” of their lives during an interview on Good Morning America in the beginning of June. She continued, “I love the notion of the future and what we might create, but I truly want to relish the moment and am working on how to stay real present.”

After getting back together, Jennifer Lopez and Ben Affleck kiss on the red carpet for the first time.

Lopez detailed how the couple traveled to Las Vegas on Saturday and queued up for their license among four other couples in her newsletter “On the J Lo.”

They arrived at the Little White Chapel, which has a drive-through “tunnel of love,” soon after midnight.

The happiest night of their life, according to Lopez.

If you stick around long enough, she said, “you might find the best moment of your life in a drive-through in Las Vegas at 12:30 in the morning with your kids and the one you’ll spend the rest of your life with.”

While Lopez was still wed to her second husband Cris Judd, the Lopez and Affleck first connected on the set of their 2001 film “Gigli.”

The relationship between Lopez and Affleck started in July 2002, after Jlo divorced Cris in 2002. Affleck also made an appearance in Lopez’s iconic music video for “Jenny from the Block,” giving birth to the character “Bennifer.”

By November, Affleck had proposed, but the pair had formally split up by January of the following year after deciding to postpone their September 2003 nuptials because of “much media attention.”

Affleck was previously wed to actress Jennifer Garner, but their 13-year marriage ended in divorce in 2018.

The new couple rejoined in early 2021, purchasing a $50 million mansion together in March, and were engaged a second time in April of this year, despite the fact that both went on to marry and divorce other people.

On their vacation in Paris, newlyweds Jennifer Lopez and Ben Affleck are creating memories with their kids. Last Thursday, JLo and Affleck flew to Paris for a romantic break.

Since they arrived in the city of love, they have been the subject of numerous paparazzi and fan photos. The famous Hollywood couple is touring the city while basking in the glow of their recent nuptials. Numerous admirers and visitors recently caught a glimpse of them as they had a private tour of the famous Louvre Museum on Tuesday.

The museum representative reportedly told People that the visit lasted about two and a half hours. After eating lunch at the neighbouring Café Marly, the family enjoyed the tour, the official added.

Previous article
Shawn Mendes Is Not Holding Back And Revealing All The Never Heard Before Details About His Relationship With Camila Cabello! But, Now its all gone!!
Next article
Zayn Malik and Gigi Hadid: The on and off couple!! Are They coming back or spilling apart is there fate?