Kodak Black Freestyles From Disrespectful attitude: Behind Bars and Raps About Hitting Yung Miami In Her Stomach!!

The American singer, singer and songwriter Bill K. Kapri was mostly known by his stage name Kodak Black was arrested last May in Miami before his performance in the Rolling Loud Music Festival. The Judge denied the Zeze rapper’s bail saying him to be a threat to the community, and it is better for him to stay behind bars. He had one of his friends who recorded freestyle for him and put it on the social media in which he raps about punching a girl named Miami in her stomach when he sees her on the first instance. Miami had announced about her pregnancy just a few days ago while Kodak had bought a ring for her. Kodak and Miami have had history. Kodak had proposed Miami in one of his songs “Christmas in Miami” with a ring pop up and bought her the ring that she wanted to have. He got angry over her for having a second baby with 808 Mafia’s who was her first boyfriend. Kodak wants to hit her in the stomach for ditching him when he had bought a ring of her choice for her. The matter was taken over by Southside. There were a series of hate posts. 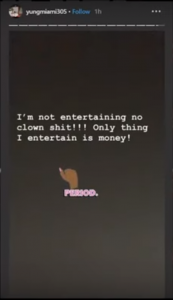 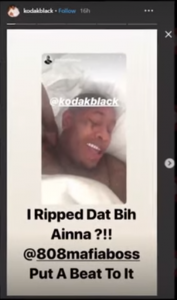 Yung Miami showed up with a post on Instagram last June saying pregnancy to be a beautiful phase of life, and she is excited for the future with her baby.

Despite being in jail for an allegation of rape and assault of a woman, this kind of behavior hasn’t stopped. This is not the first time Kodak has disrespected a woman in such a manner. He used inappropriate words for Yung Miami too. Young artists do not get into these kinds of situations, but Kodak gets more and more into such situations and does it repeatedly. His freestyle was abusive for Yung Miami, and Southside replied to the freestyler on his own.