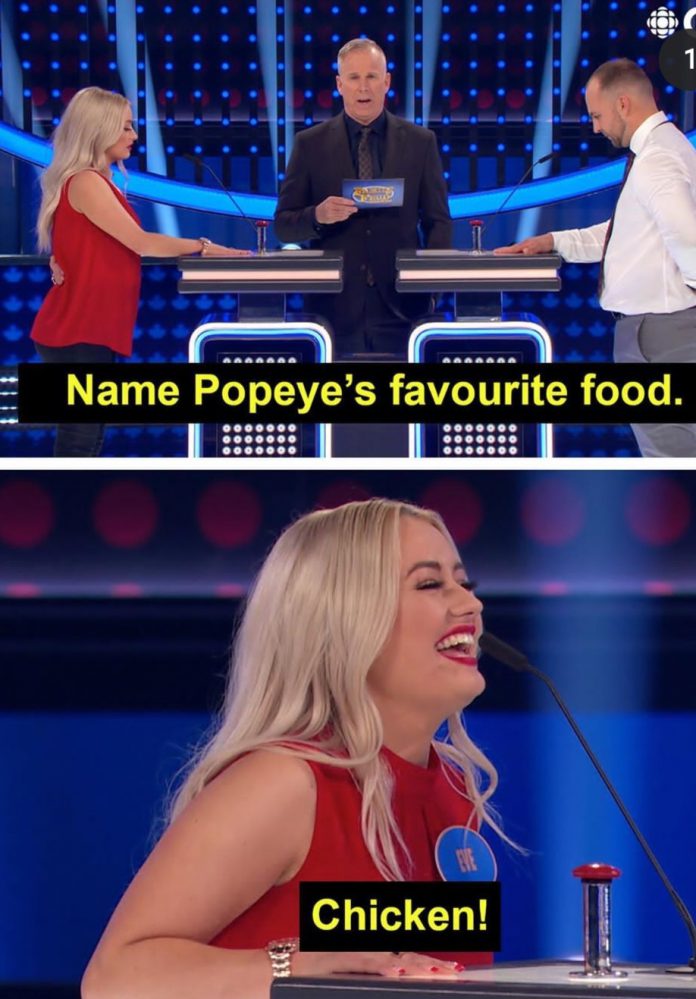 ‘Family Feud Canada’ aired its another episode on Thursday, January 9 that went viral. The viral clip shows a contestant answering “chicken” in response to the asked question, “What is Popeye’s favorite food?”

The host Gerry Dee referred to the popular cartoon Popeye The Sailor Man in his question to the two contestants. The contestant Eve Dubois was in a rush to ring the buzzer. She came up with the hurried answer “chicken” perhaps, referring to the food chain Popeyes chicken.

A short dance and celebration followed soon after the hilarious response. The competitor Logan Tomlin soon came up with the correct response being spinach. Clarifying herself, Dubois said, “thought (he) meant Popeyes chicken”.

Eva’s reaction to her response

Later, Dubois told Newsweek that she was very nervous and wasn’t really listening. As she watched the video from the show, she realized that she did not even let Gerry complete his question. “In my head, I thought he said, ‘What’s the most famous thing to eat at Popeyes?’ I thought I had it in the bag. I thought I won”, she said.

Talking about her family’s reaction to the clip, Dubois said that her family was stunned but also found it funny. They were in shock and literally didn’t even have words to say. Saying that the family wanted to reach the next round of Family Feud, Dubois said that it was probably a good way to go.

The girl has positively taken all of it and finds it comical herself saying, “I never thought that me just simply saying ‘chicken’ and doing a little dance would go this crazy”. Finding this incident exciting, Dubois said that it’s funny and weird to herself like that on television. Adding, she said that the sad part remains that people think she does not know who Popeye, the cartoon character is.

As 54% of people responded ‘spinach’ as the answer to the show’s tweet, many said that the question was unfair. The host should have had specified Popeye as the cartoon character in the question.