Attack on Titan: The Rumbling has been Unleashed in the Latest Episode 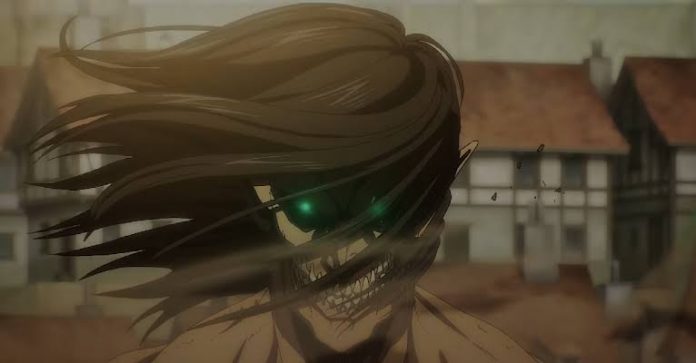 Attack on Titan finally kicks of its most devastating event ever – The Rumbling.

The event was foreshadowed long enough, and the latest episode has showed the beginning of the end. Know what happens in the new episode below:

Before we move forward, what is the Rumbling? It is the earth-shattering ability of the Founding Titan, which unleashes thousands of Colossal Titans to flatten the world. As we got to know at the end of season 1, the walls are made up of Colossal Titans. The Founder has the ability to wake them up and have them walk ahead, and flatten everything in their path.

Eren has kept on proving his intelligence and determination throughout season 4. With the powers of the Founding Titan, Warhammer Titan, and the Attack Titan, he has been steadily advancing. However, it was only recently that Eren managed to gain control of the Founder. It was needed to activate the Rumbling.

In the new episode, Eren and Zeke returned from the Paths. Zeke had chained Eren so that he can carry out his Eldian euthanasia plan. But Eren managed to directly communicate to the founder Ymir and talks to her about breaking free from the servitude to the royal family. He manages to activate her rage, which in turn, activates the Rumbling.

We got a flashback scene of Ymir in her titan form as well. We can see how much she had suffered, as she was merely a tool for the royal family. She, and her powers were always used to destroy armies of invading countries. Ymir’s titan looked like a combination of all the titan shifters. But her face was a full skull with hair, and her roar was one of rage and pain. The viewers saw the same thing the enemies saw – a walking nightmare.

So what do you think about all that’s going on?