Astronomers have observed a violent jet coming out of BLACK HOLE! What the scientists have to say?

Last year, a global alliance of scientists, from different parts of the world, came together to reveal the first-ever real picture of BLACK HOLE.

This supermassive black hole is approximately 5.1 billion light-years away from the earth at the center of a quasar. Quasars are one of the most luminous cosmic matter we know. This result actually derived through the same observation that gave us the first-ever real image of the black hole. 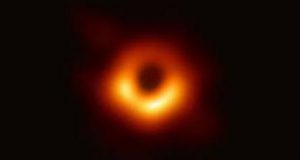 We already know a black hole is a locus in a space that possesses immense gravity. The amount of gravitational force it has is that high, even light cannot escape from a black hole. When a body comes in the space which is in the effect of a black hole, the body accelerates up to the speed of light and gets destructed due to collision.

A team of scientists observed a bursting jet, coming all the way down to the accretion disk of the supermassive black hole in 3C 279. Although, the image we got is not that clear, but it contains lots of information and mysteries of the universe.

Scientists had also observed a surprising phenomenon. The jet coming out was supposed to be straight, but the observation reveals that it is bit bend at its base, with an elongated pattern that is at the angle of 90 degrees to the jet.