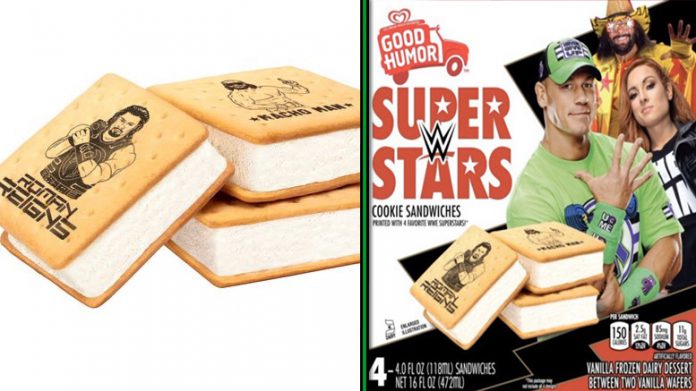 The WWE ice cream bars are coming back in different shapes but with previous design and look. The WWE themed ice cream bars were marketed for almost 20 years by Good Humor. It discontinued its manufacture in the year 2009. At that time the ice cream bar was on a stick. Itt featured on the cover of the packet stars like Steve Austin, Bret Hart, Hulk Hogan and Andre The Giant.
In the year 2011 CM Punk demanded through a campaign on public that the same should be brought to market. He asked on WWE television the company should revive its partnership with the ice cream company Good Humor. And finally it is being revived in 2021, almost in a decade of its demanding. The photos of the new ice cream sandwich has been added in the official website of Good Humor’s website.
The new WWE ice cream sandwich 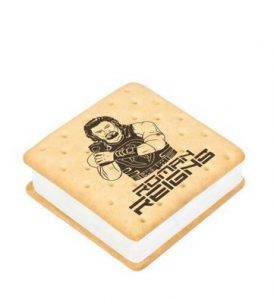 The shape of the new ice cream sandwich is slightly different without the stick and chocolate. Although no mention of the taste has been made by anyone yet,it may remain the same or some difference may occur in it. The new sandwich bar will feature John Cena, Becky Lynch, Randy Savage “Macho Man” and Roman Reigns. The ice cream sandwich can be purchased now as a one or four count.

The new ice cream cream is shaped like a cookie with vanilla ice cream in between it. The stars are featured on the cookie part of the sandwich.
The first WWE ice cream bar was introduced in the year 1987 and the box come with a WWF card in it. There availability is limited in the marketplace now as no one seems to have tasted it yet. The Good Humor announced it this week only that they are bringing the WwE ice cream sandwich into the market.

Previous article
A strong earthquake of 5.8 magnitude hits Iran. Luckily there are no reports of any injuries
Next article
Rae Sremmurd’s step dad shot and killed, step brother arrested