Woman wins Halloween by dressing up in trash collecting bags as ‘GOT Season 8’.. Clever indeed!!! 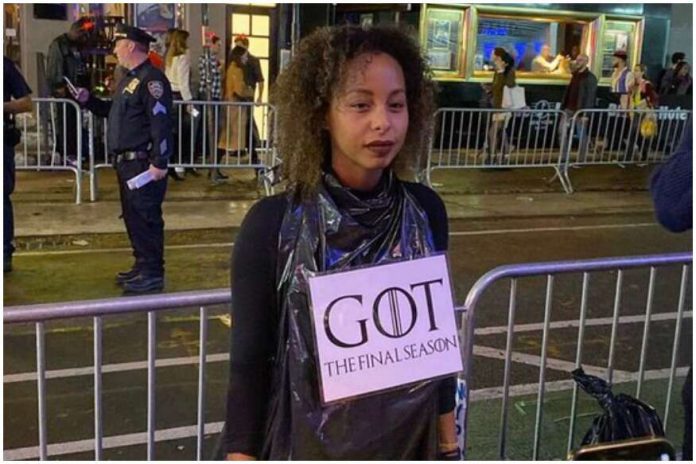 A woman in the US dressed herself up in trash bags on Halloween and called her costume the Season 8 of ‘Game Of Thrones.’ Well, it’s certainly an interesting way to depict the reactions of fans who were really disheartened with the long-awaited final season. While characters from popular TV shows are people’s first choice for Halloween, this woman in New York City decided to go as the last season of GOT as garbage bags.

A woman, named “Rad Thibodeaux” on twitter, posted an image of herself wearing a load of garbage collecting bags. She also held a Starbucks coffee cup in her hand as a part of her costume. The Starbucks coffee cup was a witty attempt to remind everyone about the same cup that appeared erroneously in one of the episodes of Season 8.  On her costume, she wore a placard that read, “GOT The Finale Season.” Her picture was shared on Friday and has received over 4700 likes and nearly 14,000 retweets.

The costume is based on the reactions of people who waited for the final season of the show and saw disappointment. The GOT Season 8 saw one of the protagonists, Daenerys Targaryen, metamorphose from the beloved “Mother of Dragons” to “Mad Queen” in just three episodes.

Moreover, Season 8 was highly criticized by fans and critics. They complained about the sudden transition of characters on the show faced in the last season, as well as the hurried trajectory and the bungled ending. Many felt that it lacked something and wondered why the ending was made so unsatisfying by the writers.

However, this interesting Halloween costume is one of the most talked and viral things on the Internet today. Some are saying that the lady has won all of the Halloween this year, while others call it the funniest and cleverest thing ever.

Previous article
The Popular Boyband K POP is in yet another controversy now that BTS Member “Jungkook” is Under Police Investigation!!
Next article
Demi Lovato is most close and Motivated by her Mother and will not take any backlash for the Speculating media!