Woman forced to watch her two kids murdered and decapitated before she too was killed by an Arkansas man!! 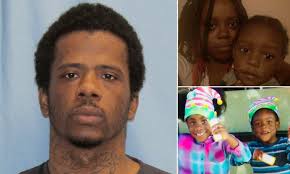 An Arkansas man allegedly forced a mother to watch as he brutally murdered her two young children, before he stabbed her 20 times to let her die.

The murderer is 26-year-old, Michael Ivory Collins. He has been convicted of the murders of 24-year-old Mariah Cunningham, her five-year-old daughter A’Laylaih Fisher and her three-year-old son Elijah Fisher in their Little Rock, Arkansas, home in December 2017.

A’Laylaih Fisher was stabbed 20 times before the brutal murderer tried to remove her head. Collins then turned his attention to Elijah whom he stabbed at least 14 times before decapitating him. Mariah Cunningham was allegedly held down by Collins’ accomplice William Burnell Alexander, 23, who forced her to watch the pettyful end of her two kids. He then killed their mother by knifing her more than 30 times.

The family’s bodies were discovered on the afternoon of December 5, 2017, at their Little Rock home. Collins’ trial started on Tuesday, October 15, in Judge Herb Wright’s courtroom. Prosecutor Barbara Mariana revealed the horrific details during the opening day of Collins’ capital murder trial on Wednesday. She told jurors it had only taken him 20 minutes to ‘annihilate’ his three victims after he and half brother Alexander robbed the family’s apartment.

It was reported that the murderers believed Mariah to be rich and the killings were ‘designed to cause the most unimaginable terror…all because Mariah couldn’t give him what he wanted.’

After the triple-murder, Collins fled to Chicago and was found five days later by federal agents, sleeping on a couch next to a pair of Adidas shoes with bloodstains on them. The stolen items were found by police along with a large steak knife—identified as the murder weapon in Collin’s broken-down Honda.

Collins was then taken into custody where he felt very guilty and confessed to his crimes to a fellow cellmate whom he told that he was haunted by Cunningham’s ghost. Collins and Alexander face charges of capital murder and aggravated robbery.

Previous article
Insanity crossed!! California mother allows her husband to rape her 8-year-old daughter until she gets pregnant!!
Next article
“Flash” star Danielle Panabaker is expecting her first child after two years of Marriage with Hayes Robbins