Tropical twins Kendall Jenner and Kylie Jenner look smoking hot in the pictures of their vacation in the Bahamas! The steam is definitely rising and you have to check these out! 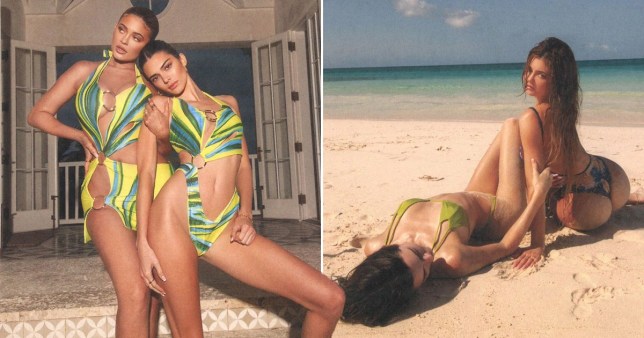 Kendall and Kylie Jenner are American models and media personalities. They are best known for their roles in the television series “Keeping up with the Kardashians.” They both are the creators of a clothing line named “Kendall and Kylie.” Kylie is also the founder and owner of cosmetic company “Kylie cosmetics.”

Recently these two sisters went on a much needed holiday in the beautiful islands of Bahamas. They shared a few snaps on media of their time over their and the viewers can do nothing but envy their escape to the tropical lands.

Kendall and Kylie wore matching swimsuits for their photoshoot with a light brown background. On the first day they shared a post with a green heart as it matched the color of their swimsuit. Very soon the post was filled with comments from fans. Khloe Kardashian commented ‘Hi Sisters!!!!!!’

Kylie shared another picture of them relaxing on the beach in their own Jenner Fashion. In the picture Kendall was lying on the ground and Kylie was looking back into the camera.

After they was back from Bahamas, Kylie posted a video of herself having a little downtime. She was watching The Bachelor while sitting on a sofa with an IV drop attached to her arm. Her sister was sitting near her, holding her hand. Kylie rubbed Kendall’s hand and Kendall was seem smiling.

TALK TO ME NICE 🤎

Well we can infer that Kylie likes to watch the dating reality television show and seems that she is taking it easy after the holiday. These two are very busy in their careers and businesses, so fans might be compelled to think that they won’t be finding time for each other. However the fans can rest assured that their sister bonding is strong as ever.