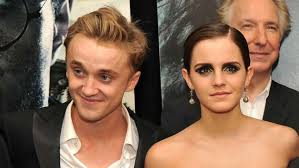 Hermione aka Emma Watson and Malfoy aka Tom Felton have reunited once again. This time not for a Harry Potter venture, but a cozy guitar lesson. Felton took to Instagram to share their adorable picture where he was teaching his co-star and friend how to play the instrument.

Emma Watson and Tom Felton are on a trip to South Africa where the two of them were seen engrossed in the guitar lesson. Tom Felton captioned the picture as “Quick learner x”. Emma can be seen gazing at the guitar with her fingers on the guitar frets and Felton guiding her.

The two of them spend quality time together a lot and this is one of their recent adventures. The two were seen together in February too where Emma had shared a picture of hers captioned as “Friends capture you the best” and had tagged Tom Felton in it.

And, we cannot forget the two spending time on a beach last November. Emma had shared a picture of them at the beach. We can’t say whether it’s a friendship or budding romance but it is great to be a part of their relationship through these pictures.

The interesting part about their relationship is that Emma had admitted earlier about having a huge crush on Tom Felton when she was between 10 to 12 years.

In an interview on The Jonathan Ross Show, Emma said that we love a bad guy and Felton was a few years older and he had a skateboard. “And that just did it. He used to do tricks on it. He was so cool.”

The first movie of the Harry Potter series released in 2001 and the last part Deathly Hallows Part 2 released in 2011. It is no surprise that after working for a decade the co-actors are close to each other. Everybody has seen both of them growing together.

See also  Here is what David Dastmalchian from The Suicide Squad thinks about the polka dot man cosplay! Check it out.