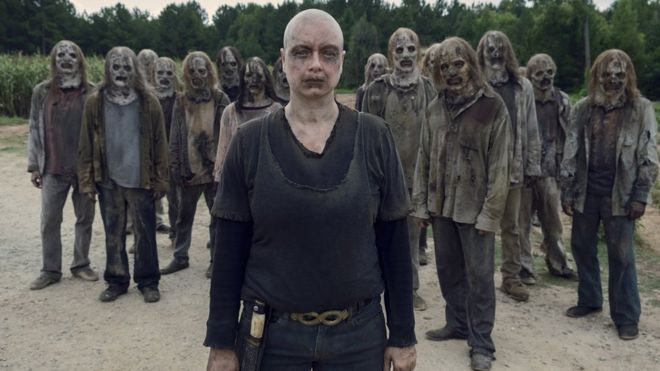 While fans are going to a big popular zombie show The Walking Dead a final goodbye with their eleventh and final season, the tenth season arrived just a few days ago, and fans witnessed some major twists and turns!

The Walking Dead Season 10 Finale Came In With A Huge Twist!

After a long delay due to the whole pandemic terror, the season 10 finale is finally here, and let’s just say something big happened and we cannot wait for the next season! As fans saw in the season 10 finale, Eugene, Ezekiel, Princess, and Yumiko saw themselves stuck in rather unfavourable circumstances when they encountered some robotic well-armed militia!

There is no place like home… #FearTWD returns tonight at 9/8.

As showrunner Angela Kang has already mentioned earlier that the unknown team of armed force are part of the Commonwealth story that has been taken straight from the comic strip itself and will be explored further in the series. Here’s a little sneak peek into all the ongoing action in the season 10 finale that. looks like it is straight out of the comic strips!

There’s no running from what’s coming. Prepare yourself for #TWD The Whisperer War The Final Showdown followed by the series premiere of #TWDWorldBeyond starting at 9/8c or stream the episode now on @AMCPlus by clicking the link in the bio.

Some Scenes Were Straight Out Of The Comic Strips!

Fans who have seen the original comic strip instantly noticed that the finale scenes were recreated straight from the comic itself. While there were some subtle differences between the two, the scenes were more or less similar to Eugene’s group surrounded and asked to drop their weapons.

One universe, one epic night, and three new episodes. Don’t miss #TWD The Whisperer War: The Final Showdown followed by the premiere of #TWDWorldBeyond and a new #TalkingDead starting tomorrow at 9/8c.

People who want to know when these Commonwealth people are, this a group of as many as 50,000 survivors residing in Ohio, and have successfully rebuild the civilisation. We are going to see more of this mysterious inhabitants in the additional episodes and the final season. The Showrunner has elaborate plans for this commonwealth story in the series.

Comedy Drama Series You Me Her Season 5 Is Soon Coming On Netflix !
Willow Smith Makes A Shocking Revelation About Her Life In The Latest Episode Of Red Table Talk!