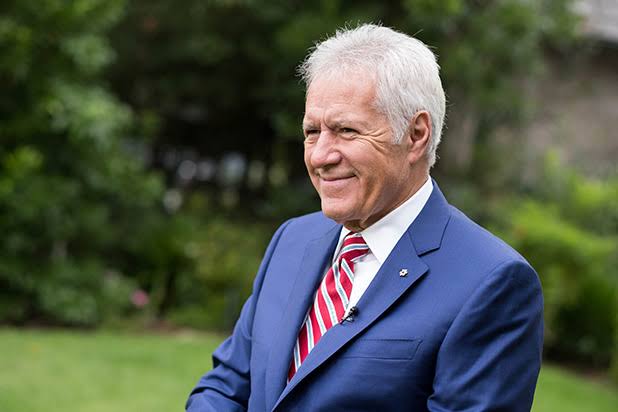 Jeopardy! host Alex Trebek was spotted at his home in Los Angeles this Wednesday, and the 79-year-old looked almost unrecognizable as he’s currently undergoing treatment for pancreatic cancer. It was a sad sight to see the host pale and weak and lets hope everything turns out well in the end.

He was spotted wearing a blue Jeopardy! T- shirt with jeans and sneakers, and had eyeglasses hanging around his neck. He’s of course, fully bald due to the chemotherapy sessions.

He shared the news of his cancer diagnosis last year after he kept suffering from acute stomach pains, and earlier this year, he was able to celebrate the one-year survival rate for patients suffering from stage 4 pancreatic cancer.

He’s also gearing up to release his autobiography called The Answer Is…: Reflections On My Life, which was announced by his publisher Simon & Shuster in April. The book will be releasing on July 21, 2020, the day before he hits 80.

On Tuesday, firefighters were spotted around his Coldwater Canyon residence as thick smoke was coming from the canyon behind his property. Even a helicopter was called to douse the flames and prevent it from entering other properties. Nobody was harmed and the fire was extinguished a few hours later.

Trebek got his second Daytime Emmy Award nomination last week for the best game show host, after winning the award last year. If he wins, that’s two years in a row. He will be competing against Wayne Brady from Let’s Make a Deal, Steve Harvey from Family Feud, Alfonso Ribeiro for Catch-21, and Pat Sajak for Wheel of Fortune.

‘Promised Neverland’ to Return with Season 2, but the Pandemic has Hampered the Schedule. Check Complete Details Below.
A Mega Surprise for Fans as Freddie Gibbs and The Alchemist have Teamed Up for a New Album Titled ‘Alfredo’