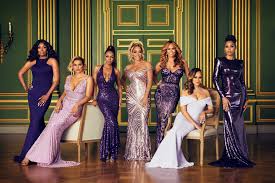 It seems like The Real Housewives of Potomac is high on drama and the fight between some of the stars is becoming all the more intense and dramatic with time! Recently, a new blame game made the situation all the more tricky between all the women!

A huge fight broke since Candiace’s physical altercation with Monique, Karen has recently blamed Candiace Dillard after she made Karen choose a side in this fight. As the newly released teaser shows, Karen expressed her disappointment as she is made to choose a side and against Monique.

Let’s talk tonight’s episode 👀 I, in no way, shape, or form condone fighting of any sort! I believe both these women are educated, beautiful, and strong BLACK WOMEN. However, I like to see other’s point of view and would appreciate to see your thoughts in the comments. #rhop #rhopotomac #potomachousewives #realhousewivesofpotomac #bravotv

A post shared by Real Housewives Of Potomac (@realhousewivespotomac) on Sep 27, 2020 at 7:13pm PDT

Moreover, Candiace talks bout how Karen should know that what Monique did was wrong. In some of the earlier episodes, fans saw how the fight went on to be so out of control that Monique allegedly attacked Candiace and tried to hit her on the head.

A post shared by Real Housewives Of Potomac (@realhousewivespotomac) on Oct 1, 2020 at 7:28am PDT

Candiace Is Pressing Charges Against Monique After The Brutal Fight!

However, Karen refuses to pick a clear side, and she is not going to abandon Monique all of a sudden. Things are getting all the more complicated after fans got to know that Candiace has pressed charges against Monique after the brutal fight.

THE LADIES OF POTOMAC ARE BACK AND LOOKING SOOOOOO BOMB 😍😍😍 Link in bio!!! #rhop #realhousewivesofpotomac #potomachousewives #rhopotomac #bravotv

The women had a sit-down after this big relation and tried to convince Candiace as this action might have severe consequences for Monique if charges are pressed. While Candiace is pretty adamant about the whole pressing charges thing against Monique, she believes that she should have known about the consequences before attacking her. We wonder how far will this intense fight go in the show, for that we need to tune into the upcoming episodes of the popular series.