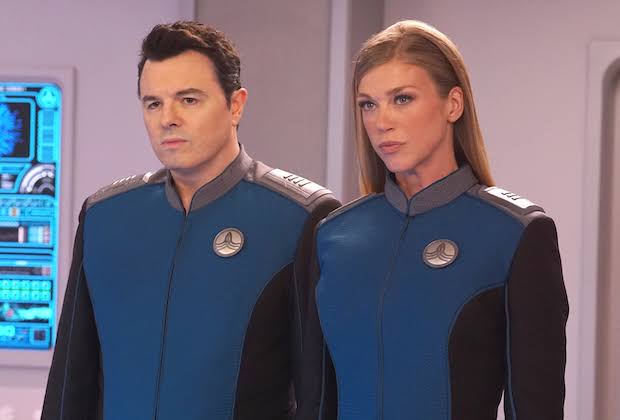 Orville cast and crew appeared at the new Comic Con to the let the fandom know what’s being cooked up for season 3 which is slated to premiere in 2020 on Hulu.

Well, season 3 of The Orville will be just as long as season 2 was with fewer episodes and that’s thanks to the move to Hulu. The Orville not only has a much bigger budget than it ever had before but it also has no limits of time restraints with these episodes Jon Cassar announced that all season 3 episodes will be about 3 minutes longer but that’s actually not true. Co-producer Tom Cosentino made the clarification that the episodes for season three will be about 12 to 15 minutes longer than they were in season 2. Season 3 episodes will run over an hour without commercials.
It was also announced that the production schedule for season 3 has been doubled so that all episodes will match the quality of the Emmy-nominated identity two-parter from last season.

Another thing we learned from Comic Con is that season 3 episodes will drop weekly and not all at once. Season 3 will be available on Hulu in the United States but it is supposed to be available for international audiences in the same exact place the previous two seasons were available. Orville season 3 is set up to have a lot more eyeball on it than it did when it was on primetime television.

The story for the season is not yet released but through the sources, we got to know that season 3 will start with a huge bang.

Previous article
The Circle season 2: Taylor Swift’s boyfriend in her famous song ‘Blank Space’ will be the part of the show!! Deets inside..
Next article
Food Wars: When can Expect Episode 3 & 4 from the Season 5 on their Screens? Check Below to Know the Details.