Taylor Swift mesmerises her audience with her melodic voice and performance on Saturday Night Live!

Saturday Night Live started its new season with Emmy Awardee Phoebe Waller-Bridge. But the show’s second episode topped it with Taylor Swift as the guest singer.

Taylor Swift appeared on the show. Importantly the pop star played two songs. The choices were ‘Lover’ and ‘False God.’

Indeed, the talented singer utilized her vocals to highlight her songs.

‘Lover’ marked her dressed in all green. Consequently,green tank top ,green pants,green earrings,green piano. Also, the green background and green piano added to the green concept. Clearly, she was bathed in emerald. 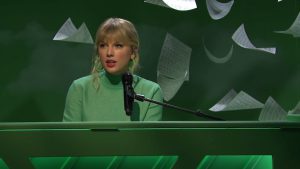 However, the song was a reprise of her song Lover. But the vocals, melody she used was a lot smoother and benign than the earlier versions. Besides, her playing piano added a soothing and ethereal quality to her extraordinary performance.

Next, she sang False God. In particular, this is the first time she performed this song live. The scenery is set with glowing lightbulbs setting the mood. Then Taylor’s look in an oversized black blazer and black sequined pants gave the song a mysterious and inquisitive look. 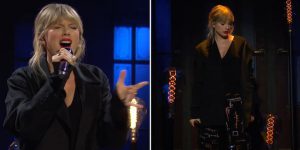 However, the highlight was saxophone playing in the background. The song relied on the beats and tuning of the mesmerizing saxophone. Conversely, the original song has used a lot of instruments.

Swift was accompanied by backup singers and Lenny Pickett, SNL’s musical director, on saxophone, giving a jazz feel to the rendition.

As a result, she has proven again that she is one of the best singers out there.

But, this is not her first time on SNL. She has appeared in earlier seasons. Also, her skits are hosting has been entertaining.

Moreover, the singer is an avid fan of shows. And that includes Killing Eve and Fleabag. Then what could be better than meeting the writer and actor involved in these? Taylor coincidentally met Phoebe Waller-Bridge.