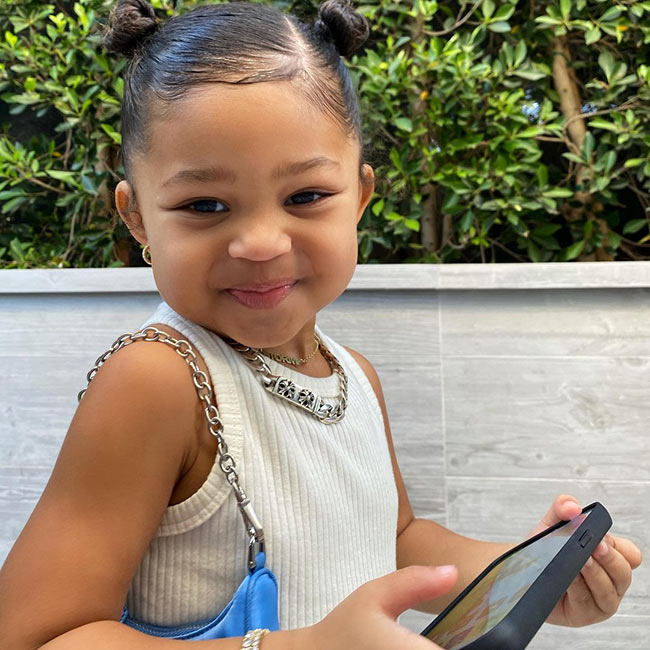 The makeup mogul and reality television star Kylie Jenner is known for her extravagant lifestyle, however, the billionaire has also managed to pamper her darling daughter Stormi with quite an expensive wardrobe that includes Fendi and Chanel!

Little Stormi lives such an extravagant life that it might shock you! From a life-size dollhouse to a Fendi stroller, this little kid has it all and we cannot even get started on her fashion collection that might give some people run for the money!

Stormi Webster is the daughter of rapper Travis Scott and makeup mogul, Kylie Jenner, while she is no stranger to the Richie rich lifestyle, did you know that she owns a Louis Vuitton-monogrammed Lamborghini! Fans loved and were in awe at the same time when they spotted little Stormi with a Louis Vuitton Nano Speedy that her mother brought for her!

The Two-Year-Old Kid Own Not One But Four Prada Nylon Handbags!

For 2019 Halloween, little baby Stormi recreated her mother’s popular Met Gala look while dressed in the iconic purple Versace just like her mother did! From Birkin to Versace, to Chanel and every brand possible! When Stormi was just a few months old, Kylie Jenner posted a small video with all of Stormi’s shoe collection and fans noticed a pair of Giuseppe Zanotti shoes that is worth a whopping  $754! Not to forget the little one has her own makeup line!

Fans were thrown in a complete frenzy when they saw the little one carrying a $15,000 hot pink Kelly bag, not to forget the girl is just two years old and owns four Prada re-edition nylon handbags!

Mr Bean A.K.A. Rowan Atkinson has officially said that he won’t be playing the role of “Mr. Bean” anymore
Harry Styles Is Breaking Millions Of Hearts While Sparking Dating Rumours With Olivia Wilde!