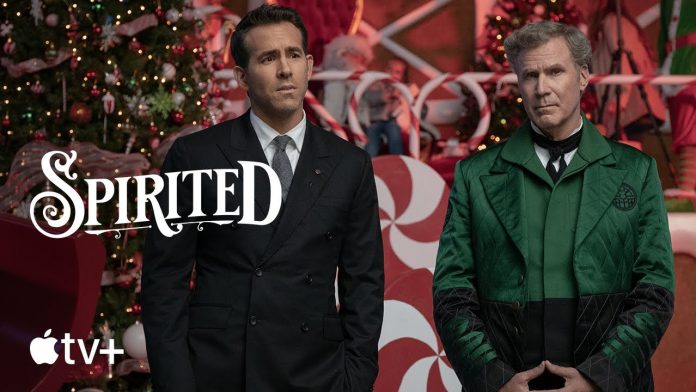 Ryan Reynolds is a Canadian actor he is one of the highest grossing film actors with worldwide box office gross over $5 Billion. He is also Known as Dead pool and popular for his Marvel Comic Movies, In Reynolds carrier He acted in many great movies like Free Guy, Red Notice, RIPD and many more. He is one of the most charming actors working today and good in his both Action and Comedy movies.

Directed by Sean Anders and written by john Morris and Anders. a musical version of Charles Dickens story of a misery misanthrope who’s taken on a magical journey. Ryan Reynolds is casted along with will Ferrell and Octavia Spencer.

On 12th of October Wednesday, Apple TV+ Posted the Teaser of Movie. The teaser showed a glimpse of Reynolds and Ferrells character, Ferrell is playing the character of The Ghost of Christmas Past, Present and Future meanwhile Ryan is starring as Clint Briggs.

He was visited on Christmas Eve by the Ghost of Christmas, but Clint Briggs turns the table on his ghostly host until present finds himself reexamine his own past, present and future. The Teaser shows that movie is a Comedy Drama it is filled with colors, animations, magic, musical and Dance Themes. The Movie will be releasing on 11 November 2022.

The Main Character of the movie is Ryan Reynolds, will Ferrals and Octavia Spencer, and co-cast involves Sunita Mani, Patrick Page, Joe Tippett, Marlow Barkley and Jen Tullock. the film will feature new originals songs by Oscar winners Benj Pasek and Justin Paul from La La Land, and the Dance Choreography of the Production is by Chloe Arnold.

Watch The Teaser of The Upcoming Film “Spirited” Featuring Ryan Reynolds and Will Ferrals.