More
HomeEntertainment'Schitt's Creek' will Return for the Final Time to Tickle Your Funny... 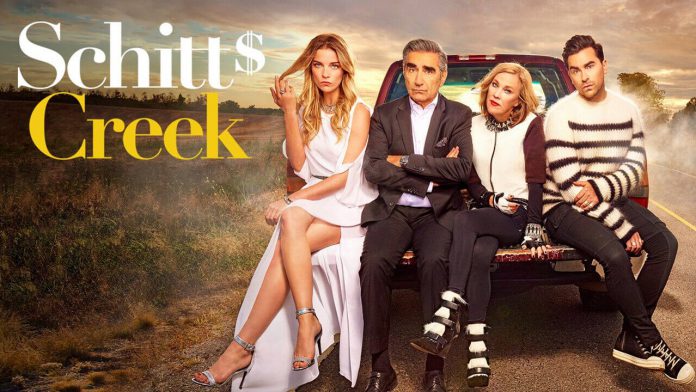 Schitt’s Creek’s sixth is a Canadian television sitcom. The series was first featured on CBC television. Well, the series is about to finish with the sixth and final season. The final season began to air on 7th January 2020 and the final episode will hit the screens in April.

The season will consist of fourteen episodes. The series was initially set by Dan Levy who came with an idea of depriving a rich man of all his wealth and watches what he do. the series is well received by the audience and have broken through several nominations.

The sixth and ~final~ season of Schitt's Creek comes to Netflix on 14 May. pic.twitter.com/vXEeqcW28C

What makes the show interesting?

Well, the plot revolves around a wealthy Rose Family. Johnny, head of a family and video store magnate. His opera actor wife Moira and their grown children David and Alexis. The story twist with their sudden misfortune after they are defrauded by their business manager and they are a force to leave all their wealth and are left with nothing but a sole remaining asset- a small town named Schitt’s Creek, which they apparently bought as a joke for their son as a gift.

Nevertheless, Roses are in Schitt’s Creek and their sudden change of lifestyle bring them to a real problem with their neighbour, Mayor and the manager of the motel. Well, that’s pretty much obvious if you suddenly leave someone to scratch but that’s what we all see through the series.

What’s in the Final Season?

The series is now part of Netflix also. And the platform has announced that it will hold the final season of series. The show’s final installment will land on the platform on 14th May 2020. As we know Netflix usually don’t hold the weekly release of episodes but rather publish all at a one time. Thus we have to wait for the series for global release.

Viewers are promised for proper closure, the family is now expected to find it’s peace with their town. we had an emotional ending in the finale of the last season, but the final season is promised to its original comic genre.