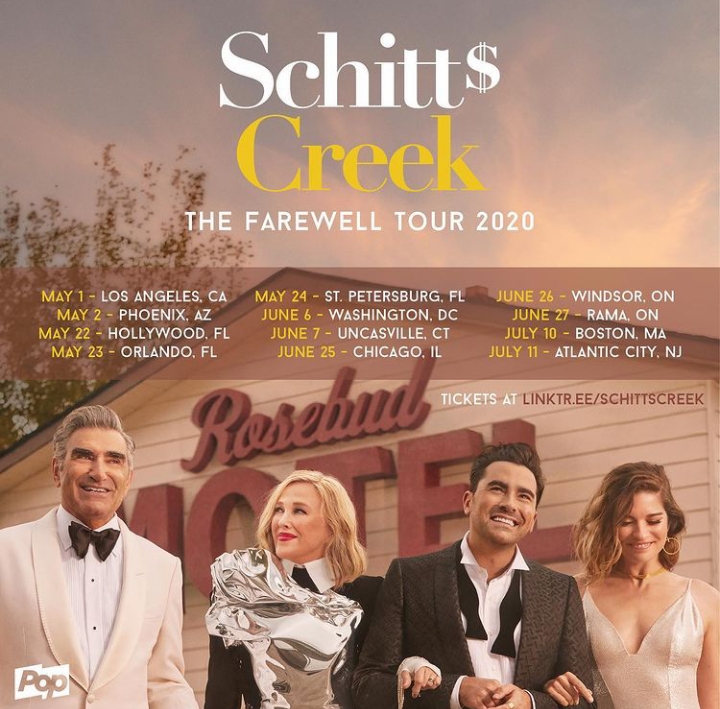 Pandemic has a lot of bad news for people to mull-over. One such news is the cancellation of the final season of Schitt’s Creeks. The Schitt’s Creek: Farewell tour is cancelled leaving the fans disappointed.

As a most loved T.V show it also received many awards. Gradually their popularity grew over the years as fans found it very interesting to binge. However, the cancellation has left the fans hard to believe the fact. The announcement was done on social media platforms by the stars of the show.

The Reason Behind The Cancellation

Raising concerns on the pandemic has made the show to halt. Safety of the people is more important for the show-makers. This being the fact, Eugene and Dan Levy announced the sad news on Twitter. They planned to postpone the ‘Schitt’s Creek: The Farewell Tour’ but state and local mandates seemed impossible to continue the filming .

Furthermore, they went on to say that all pre-pandemic schedules too were cancelled. And they are very happy to find a way to see their ‘incredible fans’ in future. Concluded with “best wishes and warmest regards”. Also they assured to refund the tickets.

Fans Reaction To the Announcement

It all started when the show hit the T.V, which depicted a broke family who moves from their luxury to a town which was bought as a joke. At first they hate their new life but then starts to love it.

Eventually, the show went on to take place in fans heart and was very successful. With Covid-19 surge the show’s star and makers called-off its final run. The filming was scheduled to occur in cities like Los Angeles, Chicago, Boston and Phoenix. On the contrary, the State and local mandates seemed to be impossible to film the farewell tour in limited time.

See also  Netflix is making a live-action Gundam movie with the director of Kong: Skull Island!

The raising cases of covid-19 in the U.S made the show-makers to halt its farewell tour. This surely disappointed the fans but Eugene and Dan Levy were kind enough to share their apology for cancelling the tour.