Saturday night live was a “LIT” when Jimmy Fallon made a guest appearance in the sketch, NATO discussion at its best!! Deets inside.. 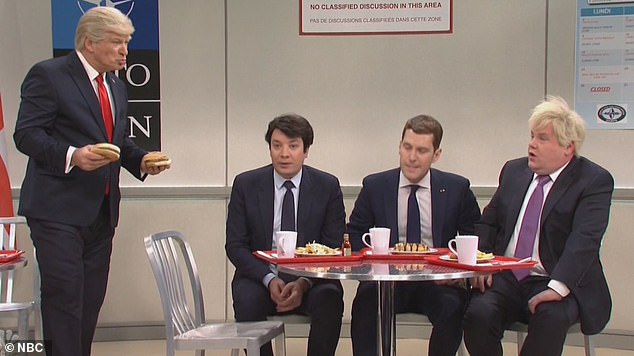 Jimmy Fallon made a guest appearance in the sketch, playing Thu Trudeau, who was sitting at the “cool kids table” in the NATO lunch room. He was joined by U.K prime minister Boris Johnson, played by James Corden and french president Emmanuel Macron played by Paul rudd.

During the sketch, the global leaders repeatedly squabble over who was going to sit next to whom as they made jabs at trump.there were jokes about younger women, much like schoolyard conversation.

“Those are my best friends,” Baldwin’s Trump said, unaware of the fact that he was being made fun of by the group. “We run this place.” He then realized that he was at the “loser table.”

Seated at a nearby table, Kate McKinney reprises her impression of German Chancellor Angela Merkel, who was thrilled to be invited to the cool kids’ table.

As Trump turned around to exit the cafeteria at the end, a piece of paper that read “Impeach Me” in black marker was revealed to be taped to his back.

Cecily Strong appeared at the end of the sketch as first lady Melania Trump, preaching against bullying while also promoting Peloton, the exercise bike brand that was recently mocked on social media for its commercial.

Previous article
Miss USA Cheslie Kyrst Talks About Failing Kindergarten, Jokes Around With Steve Harvey!
Next article
Jennifer Lopez found new love on SNL, but break the heart for being with Alex Rodriguez!! The actress played it well!!