Ryan Reynolds trolls Superman’s mustache from Justice League to promote Aviation Gin in a Hilarious video titled “MOVEMBER”!!! And Henry Cavill has the perfect response to it!!! Watch the video here!!! 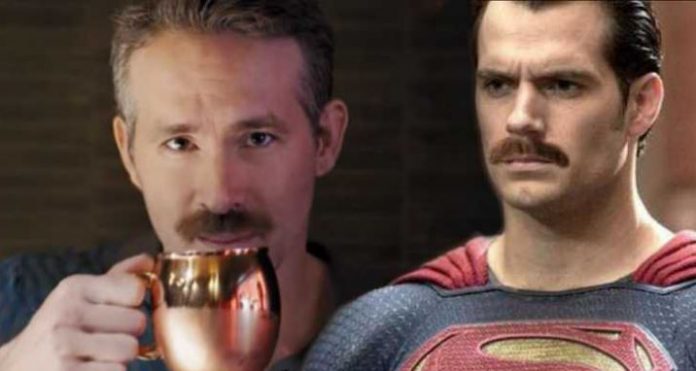 It seems that a social war between Deadpool and Superman has just begun.

Henry Cavill who plays the character of Superman got trolled for his mustache. Ryan Reynolds, the Deadpool star made fun of Henry’s mustache. It was during the time of the Justice League when the actor grew a considerable mustache for the role.

However, the mustache thingy got controversial. After the entire shoot, the editing team had to remove the mustache. It looked completely hilarious in the final scene of the movie. This incident gave Ryan a chance to make fun of it. Henry got shot in between his other film ‘Mission Impossible – Fallout’ shoot.

Now that almost two years have passed after the release of the Justice League, Ryan came out with a video on Twitter. The video was shared as a theme for ‘No November’.

The 43-year-old American-Canadian actor is busy promoting Aviation Gin. The actor has recently got its ownership accounting for about 40% of the production. It seems, Ryan is having a pretty good time promoting it.

The production house of Justice League is falling apart after leaving od Zach Synder. While they are facing a lot of problems behind the scene, there’s another problem on screen. To get media focus and attention, he played a trick to troll the superman mustache. This has definitely helped him to gain publicity for his Aviation Gin.

He captioned the video by asking a question first. He wrote if anyone feels like a superhero after consuming Aviation Gin. Ryan takes a sip of Gin in the video and his mustache suddenly gets disappeared. This indirectly portrayed the scenario of Henry from the Justice League movie.

The trolled video is funny though. Henry’s fans are giving a hilarious reaction to it rather than getting offended. This has helped Ryan to increase the sales of his product in the market.

This troll was cleverly responded by Henry Cavill. He gave a funny and sarcastic remark saying ‘can’t CGI the pain away’. He added that its sometimes good to look back wearing a superman mustache.

Previous article
Netflix’s famous anime “She-Ra And The Princesses Of Power” Season 5: When Will It Get Released? Is there a chance of having a Crossover with The Masters of the Universe? Know about fans’ theories here!!!
Next article
Dolly Parton is all Set to Tug At Our “Heartstrings” With Her New Netflix Show this Month! Kathleen Turner, Ginnifer Goodwin and many others to Star in the Series!!! Know about the Stories Behind her Classics!!!