Pricess Diana’s Iconic 1985 Midnight Blue Velvet Gown in which she danced with actor John Travolta to be auctioned next month! 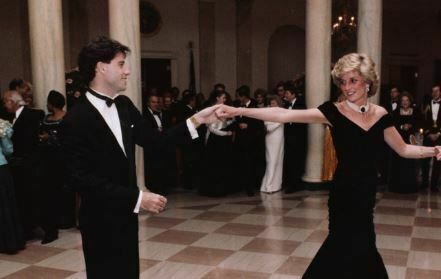 One of the most famous gowns of Princess Diana from 1985 is ready to get auctioned. It is a blue color velvet evening gown that Princess wore while dancing with John Travolta at the White House.

On Monday, an auction house announced about the sale. The gown is a Victor Edelstein dress. Princess Diana wore this dress to a dinner party hosted by Ronal Reagan (who was the President at that time). She attended the dinner with her husband (then) Prince Charles.

The Princess was pictured with actor Travolta while they were dancing together on the song ‘You should be Dancing’. The song is from the movie Saturday Night Fever. This pictured remained immortal and valuable since the day it was clicked which is 9th of November 1985.

This stunning evening gown dress with a great historical story behind it is estimated to cost around £250,000-£350,000 (sums up to $450,000). There are two other dresses that will get auctioned with this blue velvet gown. The auction is held by Kerry Taylor Auctions on the 9th of December, this year.

The other two dresses include a dress with long sleeves and midnight blue color velvet that was designed by Katherine Cusack. The second one is a navy wool day dress, designed by Catherine Walker. The former dress is from 1986 and the later one is from 1989.

The dinner party evening gown which was designed by Victor Edelstein was one of the dresses that Princess auctioned from a Charity. The outfit got sold in June 1997 for the first time by Princess herself. It was just a few weeks before she died in a car accident in Paris.