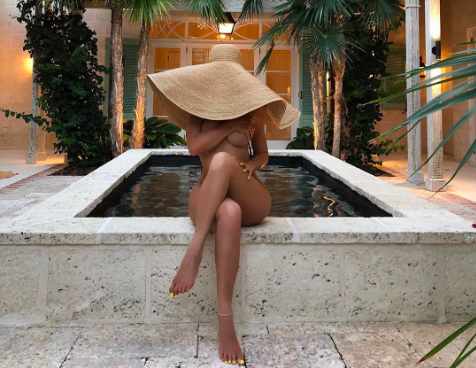 Kylie Jenner poses nude with boyfriend Travis Scott on the cover of Playboy magazine ‘Pleasure’ issue. Jenner shared a preview of the photoshoot on her Instagram ahead of the magazine’s release. Pleasure issue is “a celebration of the things that bring us joy: sex, art, food, music, spiritual connection, travel, cannabis, and community.”

Kylie Jenner captioned the post, “When Houston meets LA..,” along with a yellow heart emoji and #comingsoon. The picture shows Jenner in only a cowboy hat, probably as Scott is from the state of Texas. She was facing away from the camera as she embraced Scott. The rapper had his shirt off paired jeans. Scott was the creative director for Jenner’s photoshoot.

The recent post of them together puts the rumors of their relationship being on the rocks at rest. The couple had only confirmed their connection after Stormi was born and made their first public appearance together at the 2017 Met Gala.

Billionaire, television star and cosmetics mogul Kylie Jenner appears on the cover of the magazine a decade after her sister Kim Kardashian. The 21-year-old became the world’s youngest-ever self-made billionaire earlier this year, according to Forbes. This photoshoot is not the first time the young celebrity had posed nude on Instagram. She had shared a picture of herself by the poolside with only a straw hat earlier in July.

Playboy too shared three close shots of the couple on Instagram. The extreme close-ups give the viewers only a glimpse of Scott’s Playboy bunny chain and Kylie’s iconic red lips. The couple recently appeared at the premiere of Scott’s Netflix documentary, and they displayed quite an amount of PDA on the red carpet. The Astroworld rapper has new music coming out as he shared while performing at 2019 Made in America festival in Philadelphia.

Playboy’s Pleasure issue is a quarterly magazine, and the fall issue will be available soon for $24.99.

Instagram got a new user! Amanda Bynes flaunts her pink in her debut post on Instagram.
“The day was unlucky, but not for all!”: ‘Interesting Tie with the 9/11’, Actors who had nearly missed that day.