It has been 15 years since our Friends Monica, Rachel, Phoebe, Ross, Chandler, and, Joey visited us. But we still miss them every day. The iconic sitcom just celebrated its silver jubilee and still remains one of the most-watched shows today. It is our safety blanket, our feel-good essential at the end of a stressful day.

So, it makes sense Little Owl – the restaurant whose exterior was used for the Central Perk café – remains a tourist attraction. The Greenwich eatery always has people surrounding it day in and day out. But while great for business, it is also a curse for the restaurant according to the owner, Joey Campanaro. 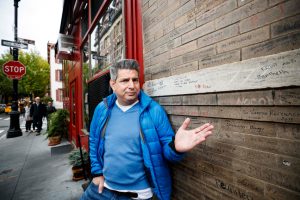 Campanaro who is also the chef at Little Owl recently spoke up about how fans of the show always gather around it. They take pictures outside the famous landmark and more-often-than-not leave a mark – literally. The visitors have defaced the brick wall of his restaurant. They scribble down their favorite lines from Friends on the wall with either permanent marker or lipstick.

Campanaro estimates the number of visitors outside his restaurant to be around hundreds on a slow day. But when it’s the weekend, it can even increase to a thousand. And since the show celebrated its 25th anniversary recently, fans are flocking to Little Owl in greater numbers.

But how did it all start? Campanaro believes his friend might actually be responsible for the start of the trend. His pal who is also a graffiti artist first wrote on the wall after dinner with Campanaro. He scribbled “I love Joey” which may have led people to believe it was a reference to the character Joey Tribbiani from the show.

However, all of it is going to come to an end soon, hopefully. The owner is planning to sandblast the brick wall soon. After that, he will install a surveillance cam to make sure no one vandalizes the wall again.