Nicki Minaj doesn’t take a sh*t for her Husband’s Past and Bashes Wendy Williams By Tagging Her As Demonic! 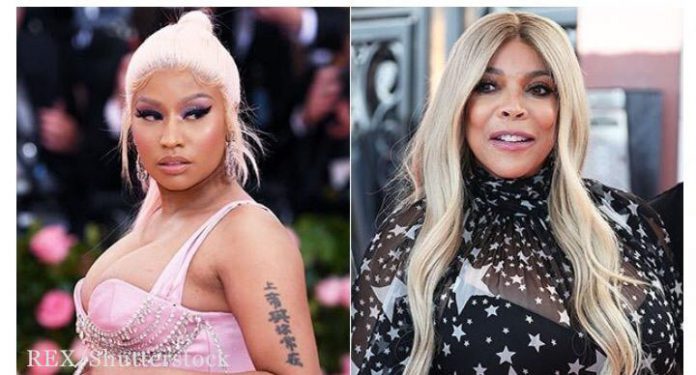 Nicki Minaj has announced a break from the music industry a couple of months back, but it seems like she still manages to make it to the news! Apparently, she bashed out on someone who allegedly bad-mouthed her husband. Let us dig deeper to understand the incident.

Nicki’s Husband Kenneth Petty Tagged As A Murderer By the Host Wendy Williams!

Nicki Minaj was left with no other option but to backfire host Wendy Williams. Apparently, Wendy has slammed Nicki’s husband, Kenneth Petty, and well, the Queen of Rap was not going be quiet on this matter.

The reason why Kenneth was tagged as a killer because of his past criminal records. He is a registered sex offender in the state of New York. He also served time in prison for manslaughter after being convicted in the year 2002. Nicki and Kenneth got married in the month of October. Wendy did congratulate the newlyweds but also mentioned that the husband is a sex offender and a murderer.

Nicki Lashes Back At Wendy With Wrath!

Nicki fired her reply through Queen Radio, saying that Wendy is demonic who has not received much move and appreciation in her life. Nicki continued to say some people deliver news with ill intent and viciousness in their hearts. Nicki said that some people just could not let a man forget his past mistakes and move on with life.

The Super Bass singer did not end here. She even targeted Wendy’s estranged marriage with Kevin Hunter Sr. She said that Wendy is just plain vicious. Wendy has still not commented on this outburst. Let us see what the host has to say in return. She said that the host went on paying for all the bills, and at this age, she is all alone. According to the rapper, the host is just plain vicious. It would be interesting to see how far the feud between these two ladies goes.

Previous article
Looks like pleading guilty was the best option for Kellen Winslow Jr after losing his wife and children after 13 years of marriage! He was found guilty to sexual assault charges!
Next article
Was Bhad Bhabie Lashes Out On Woah Vicky was real or another publicity stunt for both of them??An unanswered quest under speculation!!