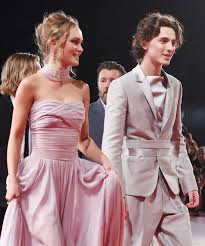 Almost a year after sparking dating rumors- Timothee Chalamet and Lily-Rose Depp are taking their relationship from real life to professional. The young actors are playing husband and wife in Netflix’s THE KING, a movie based on Shakespeare’s King Henry V. Throughout the last year, the dating rumors of the two began to swirl when fans caught them cozying up around NYC.

The rumors recently intensified when they walked the red carpet together at the Venice Film Festival, but they did not pose together for any official-couple pics. The pair have been expertly avoiding talking about each other, but couldn’t help sharing some adorable glances. However, they looked like dear friends, laughing and smiling outside and inside the theater, where they were seated a couple of co-stars apart.

In October last year, Timothee,23 and Depp,20, were spotted kissing in the rain, out in New York City. This intense makeout session of the two confirmed their relationship to an extent, but an official statement is yet to come from them. However, it is hard to point where this love story started and where they stand as a couple today.

Recently in an interview, when asked about her relationship, Depp didn’t confirm or deny their relationship; instead, she started praising Chalamet. In her words about how much she admires Chalamet’s talent, she said, “It’s always exciting to work with somebody who you know has given themselves so wholeheartedly to their role and is so invested.” Later she added,” It can be nerve-wreaking to work with people whose talent you admire so much, but hopefully it can only make things better.”

While Depp and Chalamet are yet to speak about their love lives publicly, fans can at least watch them as couples on-screen as The King is out on Netflix now. The movie was released on 2nd September at Venice Film Festival, and its digital streaming started from 1st November on Netflix.

In one of the meetings with GQ, Timothée Chalamet got real about the social media response to photographs of him and ex Lily-Rose Depp kissing on a yacht in Italy the previous summer.

The young actor told  GQ, “I went to bed that night thinking that was one of the best days of my life. I was on this boat all day with someone I really loved, and closing my eyes, I was like, indisputably, ‘That was great.'”

Timothée said those emotions evaporated when paparazzi released photographs of him and his co-star making out on the boat’s deck. “And afterwards awakening to every one of these photos, and feeling humiliated, and resembling a genuine nob? All pale?” He added, “And then people are like, ‘This is a P.R. stunt.’ A P.R. stunt?! Do you think I’d want to look like that in front of all of you?!”