Mexico is ready!! The Day of the Dead Barbie is all set to be played and to celebrate the festival!

Girls are now going to welcome new Barbie dolls to their shelves. And this Barbie doll, unlike the previous versions, is going have beautiful flowers embroidered on her flowing black dress. Never did Barbie come in any dark colors, let alone black. And what more, this Barbie doll is going to have a skull painted on her pretty face. 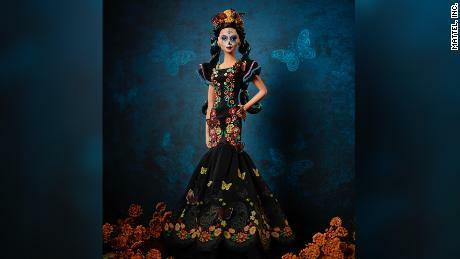 Mattel, the company that is currently owning the Barbie brand, has revealed that this limited-edition Barbie doll costs about $75. Mattel said that the limited edition doll honors traditions, rituals, and symbols that are frequently seen throughout the time during the festival of Day of the Dead.

In this festive-limited edition, Barbie is seen embracing a long black dress that is embroidered with butterflies and hearts along with colorful ruffled short sleeves. Barbie’s face is painted with a skull, a tradition that Mexicans follow without fail every year. A crown made up of marigolds and monarch butterflies rests on the top of the Barbie’s head.

This year, the Day of the Dead is celebrated on the 1st and 2nd of November. To top of the parties that take place during the festival time, most of the families living in Mexico set up ofrendas that feature the photographs of their late family members and late relatives as well as their late beloved ones’ food and drinks.