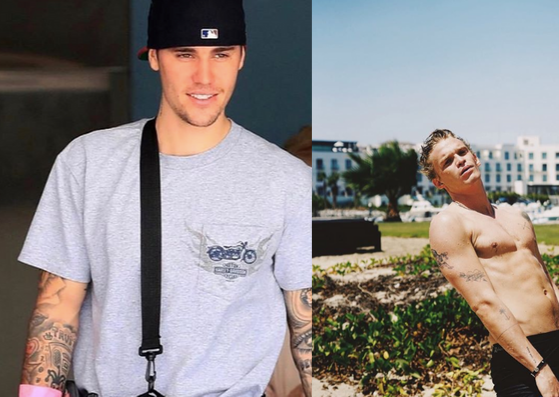 Everyone is talking about Miley Cyrus & Cody Simpson’s new relationship, while Miley was hospitalized, for her tonsillitis diagnosis, many things happened behind her back. Justin Beiber already made a plan of a double date with Cody Simpson.

After 22-year-old Aussie singer, shared his shirtless picture on Instagram, Justin Beiber couldn’t stop himself commenting, ” Ur body is a wonderland.” Followed by ” Double date?”

In answer, Cody simply replied to text him. It looks like social media will flow with these two new couples, Miley & Cody, Bieber & Hailey, double date pic. But the question is still unanswered that why Justin wants to meet Cody? Well, We will find out once they meet, but it is not going to happen soon, as Miley is recovering from her recent surgery.

Mood caught after my first race back last weekend 🏊🏼‍♂️

The pop star Miley Cyrus has come out of her previous relationship and recently making headlines for her new beau, Cody Simpson. Lately, she has gone public about her relationship with Cody. For that, she also received criticism and shoved by trollers for rapidly hopping from one relationship to another.

But the pop star didn’t take the trolls lightly and took it to her twitter handle, saying she is free to make her decision, and want to move ahead peacefully, and don’t want others to make her feel guilty about it.

However, she is recovering from her tonsillitis; she was also hospitalized but now returned home. Miley also uploaded a picture in which her new beau visit her in hospital on Instagram story. Simpson also sang a song, specially written for her.

She wrote, “Its too special to be only heard in full by my ears, so I am currently pressuring him to DROP IT next week.”

Miley swayed by his gesture that he came to meet her and also wrote a beautiful song, especially for her.

It looks like the new due are savoring every moment. As they don’t leave any moment to capture and share their pictures together. I hope this new relation lasts longer than Miley previous’s one.

Keanu Reeves visited her ex Ali Wang’s show and she says that the chances of them getting back together are slim..
Lili Reinhart latest instagram story talks about the good times she spend with costar late Luke Perry and her with heart touching words pay tribute to him…..