Jeff Goldbum back lashed after he defends Woody Allen despite sexual abuse allegations against his adopted daughter!!! 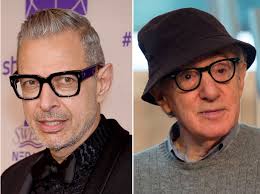 Fans are criticizing Jeff Goldblum because of his “innocent until proven” defense of Woody Allen. Jeff said that he would like to work with Allen again, despite the long-running sexual abuse allegations on him by his adopted daughter.

In a recent interview, Goldblum talked about the sexual misconduct accusations against Allen, which includes her adopted daughter’s allegation too. In 1992, Dylan Farrow alleged that the Oscar-winning director has sexually abused her at the Connecticut home, where she lived with her mother, Allen’s partner Mia Farrow.

Goldblum said, “I think there is a presumption of innocence until proven guilty. I enjoyed working with him many years ago admires his body of work. So I would consider working with him again until I learned something more.” Moreover, Goldblum made it clear with this statement that the disturbing claims were not enough for him to refute the director with whom he worked earlier. Jeff Goldblum, 77, had a role in Allen’s 1997 movie Annie Hall.

Adding to this, Goldblum claimed that the #MeToo movement is very, very positive and long overdue, and he supports it wholeheartedly, but he is still a fan of Allen’s work.

Allen Woody was accused of molesting Jeff’s adopted daughter, Dylan, at the age of 7. He denies any wrongdoing, and the allegations have never been proven. The allegations resurfaced in the #MeToo era, but Allen claimed that Farrow used Dylan as pawn amidst their bitter split.

A number of actors, including Ellen Page, Greta Gerwig, Timothee Chalamet, Mira Sorvino, and Natalie Portman, have refused to work with the director ever again following the allegations. However, Allen continued to enjoy critical and commercial success despite the news that he had begun a consensual relationship, another of Mia Farrow’s adopted children, Soon-Yi-Previn.

Naturally, Goldblum’s comments are gathering serious backlash on the Internet, with reactions ranging from intense frustration to disappointment. Here is how fans are reacting.

"Even though I feel like the #MeToo movement is very positive & long overdue & I support it wholeheartedly and take it very seriously, I also admire his body of work. So I would consider working with him again, until I learned more.”

Previous article
Watchmen’s Doctor Manhattan: a significant piece of the first funnies, and Watchmen’s vigilantes to have genuine superpowers!! Checkout for details!!
Next article
Rumors started! Can there be fire without spark? Kylie Jenner is even more closure to Drake after her split with Travis Scott??