It was hot on the yacht when Kristen Stewart was seen kissing Stella Maxwell! Is it just the heat of the moment or their relationship is back on track?

Kristen Stewart and Stella Maxwell sharing kisses on a yacht!

Seems like Charlie’s Angels actress “Kristen Stewart” and Victoria Secret’s model “Stella Maxwell” can’t keep their hands to themselves. The couple was in the news when they split up in late 2018, however recently they were seen enjoying the level of PDA by sharing cuddle and kisses.

The duo was pictured hanging out together in Los Feliz, but nothing hot and heavy happened between them. It looks like this romance has been back on track for a while. Kristen and Stella recently confirmed the reconciliation rumor when they were pictured on a yacht in the Amalfi Coast in Italy. Kristen and Maxwell were seen sharing a passionate kiss! Stewart is wearing a mismatched bikini while Maxwell is wearing an all-white two-piece while she leans in to kiss her.

Stewart previously dated Twilight star, Robert Pattison, but that doesn’t work for Kristen.  She and Stella started dating back in 2017 but parted their ways at the end of 2018.

Fans believed Kristen had started dating stylist Sara Dinkin back in April. She was seen sharing a kiss with Sara at Coachella. But it looks like old flames are reigniting, and Kristen Stewart and Stella Maxwell are back together. 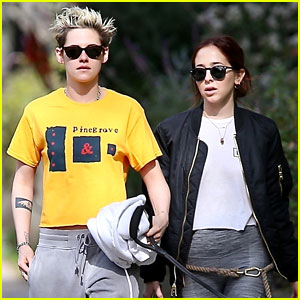 Kristen and Stella ’s relationship back on track

The dating rumors started when paparazzi photographed them together multiple times in May and June. But whether they were on again couldn’t be confirmed. With the two making out together, their temporary, six-month split has undoubtedly come to an end. The duo was relaxing in Italian sunshine along with some friends.

Kristen was also seen snapping some pictures of Maxwell in her white bikini.