In hope of Meeting Ellen, Tiffany professional photographer made this dad and daughter Halloween photo shoot straight out from a nightmare!! 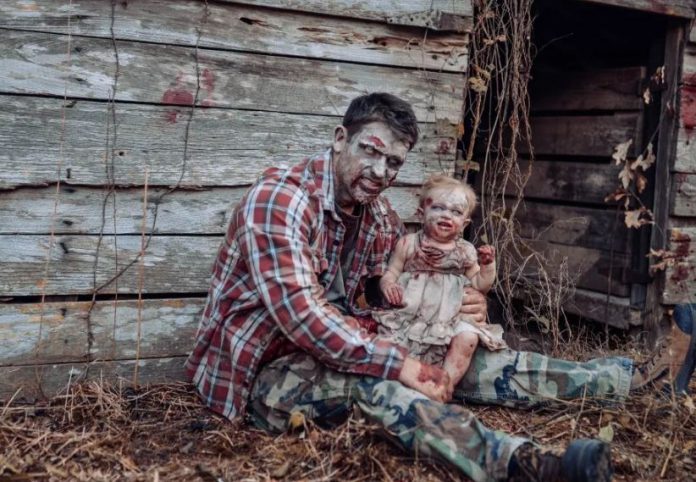 Straight from Alabama, the Halloween celebration has reached its peaks. This daddy and daughter photoshoot is not the usual you get to see every other day.

Tiffany Renfroe and her hubby Daniel Renfroe decided to organize a spooky photoshoot. Their 11 months daughter was involved in the shoot too. Tiffany is a photographer, and Daniel is an inspector by profession.

Daughter Oakley Renfroe was made to wear a dirty frock dress with spooky face make-up. Daddy Daniel was also done a zombie make-up you see on your TV screens. He added props to show his dripping intestines.

The intestine was made out of a cake and red sausages. One of the shots featured Oakley feasting on these intestines.
Another snapshot featured Daniel turning into Michael Myer’s character. He stalked the baby zombie from far away in the woods and was captured fetching his daughter.

Mommy Tiffany Renfroe disclosed that Daniel was upset about the fact that she got clicked with her daughter recently. Daniel also wanted to do a separate photo-shoot with daughter Oakley. This was the reason they decided to shoot in the first place.

Tiffany had to edit Oakley’s pictures to give an effect that she is having contacts in her eyes. She added in her Facebook that though the shoot was of a dead and creepy surrounding, shooting it was very lively.

As Tiffany is a professional photographer, she made the set up perfect for the creepy photoshoot. Now that the snaps have gone viral, Tiffany is hoping to meet Ellen DeGeneres and land on her show with her husband and daughter.