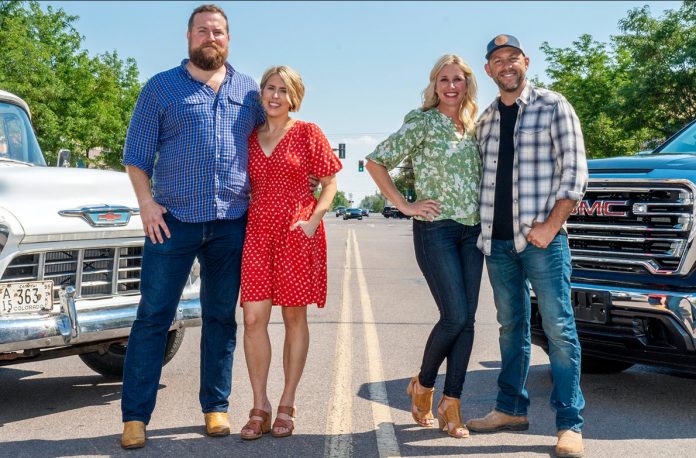 This is the second season of Home Town Takeover. The series will feature home improvement expert and host, Ben Napier and his wife, Erin Napier.

For the second season of the community makeover programme, hosts Dave and Jenny Marrs and Ben and Erin Napier will alternate hosting duties.

Home Town Takeover Season 2 will premiere in early 2023 on HGTV.

The small community, which is roughly an hour outside of Denver, received the news on Tuesday from HGTV that they will be getting a complete makeover on the second season of the popular programme.

Ben and Erin Napier, stars of the first season of Home Town, arrived in Wetumpka, Alabama, to renovate residences, repair businesses, and revitalise public areas in order to assist the community in recovering in the same way that their own hometown of Laurel, Mississippi, did.

This time, the Napiers will be joined by new cohosts Dave and Jenny Marrs from Fixer to Fabulous to make a significant improvement to Fort Morgan and launch its transition into a bustling centre and a popular tourist attraction.

Ben tells PEOPLE, “It’s just a really cool town and it’s so different from Wetumpka and Laurel, but at the same time, it has all of the same problems they had.” He cites young people leaving for larger cities and the absence of a bustling main street to entice tourists as examples.

He notes that the town has a tremendously interesting history and a really varied cultural background. “And just like any small town across America, it has these really inherent charms about it. We want to go there and assist them in telling that tale.”

“The goal is to really help towns that are struggling,” Erin adds. “Our show is about taking what’s great about a place and amplifying it so that people who live there can be proud of where they come from and people who don’t live there will want to visit.”

The charming town has a population of just over 11,000 people and is located in Morgan County, which is home to roughly 28,000 residents.

Fort Morgan was founded in 1864 as a military post to protect settlers in the area from attacks by Plains Indians. It was later named after Colonel Christopher A. Morgan, who served as the first commander of the fort. The town’s Main Street is lined with Victorian-style buildings that date back to the late 1800s.

In recent years, the town has been struggling economically. The median household income is just over $37,000 and the poverty rate is nearly 16%.

However, there are signs of hope. A new brewery, Main Street Taphouse, opened last year. And a new coffee shop, The Colorado Room, is set to open soon.

The Napiers and the Marrses will begin filming in Fort Morgan this summer. The six-episode series is set to air in early 2023 on HGTV.