Harry Style Dedication to Camille Rowe at its best!! Has the “Fine line” become a little hazy with this song?? 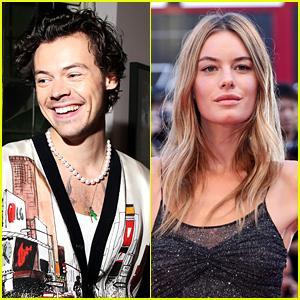 Harry Styles is all set with his new song titled Fine Line. One of the new songs from the album Cherry has a voicemail from his ex-girlfriend. Now fans are quite sure that the voicemail is from his ex, Camille Rowe.

Is The Song Dedicated To The Singer’s Ex Camille Rowe?

The voicemail that is a part of the song is in French. The twenty-five-year-old singer was dating the thirty-three-year-old French model from 2017 to 2018. While he hasn’t confirmed it’s actually Camille speaking in the voicemail. Harry has opened up about including the voicemail on the song.

Harry Styles confessed to Apple’s Zane Lowe that he asked Camille to include her voicemail in the song. The purpose was to make her realize what he felt. He was feeling great and he said how petty people get when things don’t go the way one wants it to be.

some of the lyrics in the song are too personal for the singer it seems. Some of the lines have a direct reference to Camille. For instance, there is a line in the song that refers to taking around in his parents’ gallery?” The singer is likely referring to art gallery owner Theo Niarchos, who appeared on Camille’s Instagram account earlier this year.

Previous article
Music Woman of the decade, Taylor Swift gives a stirring speech; demands end of “Toxic Male Privilege”
Next article
This Suspicious Man Has Assaulted a String Of Women Over The Span Of Thirty Minutes.