GOSSIPNEWS TO THE RISING SUN
More
HomeEntertainment
December 10, 2019 8:42 am EST

This Sunday, Google Doodle honors French Sculptor Camile Claudel, who was a very renowned woman as she in 19th century France was able to overcome gender-based restrictions to study art.

A female artist in her way but she is mostly remembered for her relationship with renowned sculptor Auguste Rodin. She started showing her interest in sculpture and clay molding and on the advice of a sculptor she moved to Paris at the age of 17. She wanted to study at Ecole des Beaux-Arts but they didn’t allow girls to study there at that time, so she signed in Academie Colarossi. 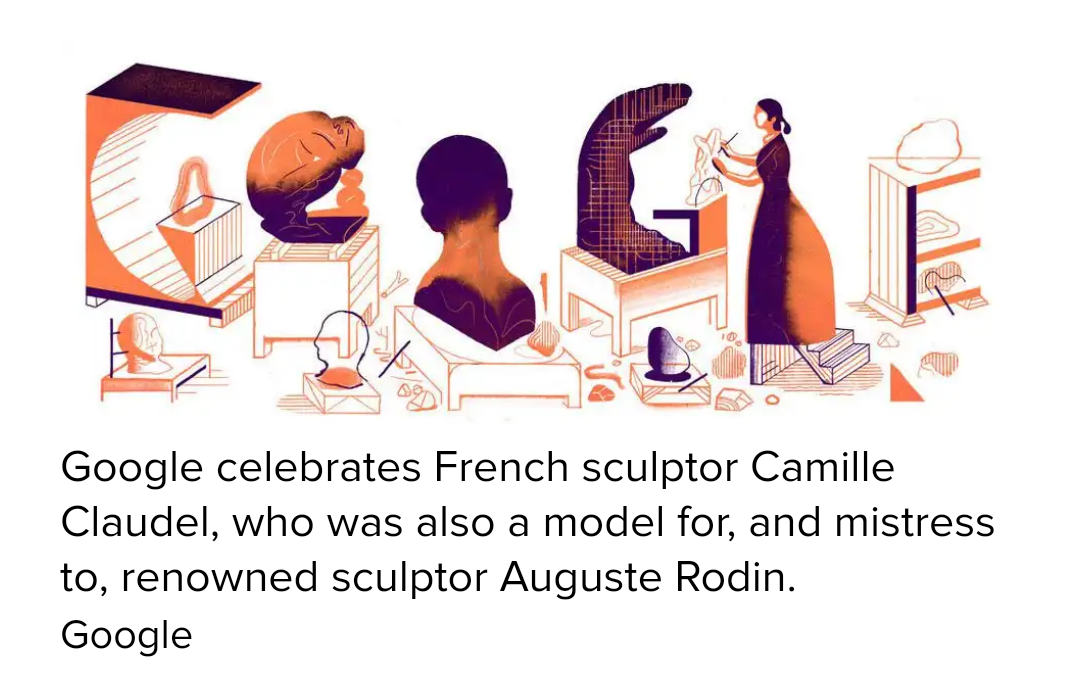 In 1881, she was at Montparsenne section of Paris at the urging of Alfred Boucher for three years she studied with him and then, Boucher asked Rodin who created ‘The Thinker’ was asked to take her under his guidance. She started working as an assistant to Rodin, she soon started serving as his model, mistress and confidant and Claudia’s many works were also inspired by Rodin’s technique mostly, the techniques and facial shapes and figures.

In 1887, Claudel’s Jeune Fille a la gerbe was an exact copy of Rodin’s Galatea, She was in all in all was unable to recognition on her own, and after the intimate relationships ended and after this, she went under the influence of mental illness and she became obsessed with Rodin, accusing him of stealing her ideas and even tried to kill her. In that period, she destroyed her every work and spent the last 30 years in a mental institution and never sculpted again.

She received few visitors during her 30 years at the institution and after her death in 1943 at an old age of 78. Certain historians have defined her as an artistic legend whose life was an inspiration to the modern generation with much of her work being displayed at the Musee Camile Claudel in Nogent-sure-Seine an hour outside Paris.