Faith Evans Was Arrested For Physically Assaulting her husband! Is Everything Alright Between The Two or is the case of domestic violence actually true? 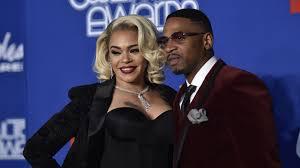 One of the most popular couples of the music industry Stevie J and Faith Evans has fallen in love and has been together for quite a while now. However, new news has come to the forefront of showcasing a brand side of the relationship and it’s nothing less than shocking!

Faith Evans Was Arrested Under Severe Allegations Of Domestic Violence!

Apparently, Evans has been arrested for allegedly assaulting her husband. The whole incident happened weeks ago when the two got into a heated argument in her house in Los Angeles and the whole scenario got a bit heated. Thins soon turned physical and even the cops got involved.

When police arrived at their place, there were visible marks of a physical fight on Stevie’s face and Evans was arrested under the allegations of committing physical violence against her husband.

Is There Any Trouble In Paradise For The Couple? Have A Look.

Evans has been bailed out and it seems like both of gem has yet not addressed the whole messy incident that led to police arrest! However, things seem pretty normal as there are pictures on social media that don’t state otherwise. Let us take a look at the Instagram post made by the Stevie.

However, it is not the first time the couple had been in the negative limelight because of their internal issues. The couple was rumored to be having trouble back in 2019. There were some cryptic messages on Twitter and later Stevie cleared the air by saying that his account was hacked. He later issued a post saying that everything is fine between the two and nothing is wrong. Well, fans now are sure that something is wrong between the two.

Previous article
Is Miley Cyrus still not over Liam Hemsworth? Is that why she and Cody Simpson aren’t married yet? Read the full story here.
Next article
Tekashi 69 Might Be A Bit Too Cautious After Getting Out Of Jail: seen wearing bullet proof vest. And how is Snoop Dog related to this? Read to find out.