Dynasty Returns With Season 3 and looks like Carrington’s have some hidden secret to share!! Who is playing games this time?? 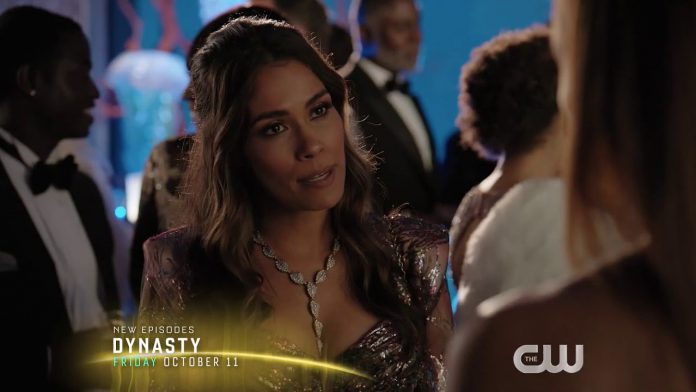 Dynasty season 3 trailer was launched last month. Since then, Dynasty fans and supporters are waiting for the full-fledged series. All are intrigued to see the new changes, plots, love, rivalry of the Carrington family.

Finally, the wait is over the premiere of the Season 3 aired on The CW on Friday, October 11, at 9 p.m. ET/8 p.m. CT, following the first episode, titled “Guilt Trip to Georgia.” Everyone gave mixed up reaction regarding the latest episode.

The successful team Josh Schwartz and Stephanie Savage created Dynasty. They are the award-winning team behind Gossip Girl, The OC, and Marvel’s Runway

Who are all in the main cast of Dynasty Season 3?

This time two new faces will be seen in the new season taking over as Alexis Carrington and Cristal Jennings. Most of the remaining Carrington’s will be back as same, including Fallon (played by Elizabeth Gillies), Blake (Grant Show), and the evil Adam Carrington (Sam Underwood). Outside of the leading family, Sam Jones (Rafael de La Fuente), Michael Culhane (Robert Christopher Riley), and Carrington family butler Anders (Alan Dale). Fans will also witness the return of Michael Michele, Jeff Colby, Kirby Anders, and Liam Ridley.

As per the sources, the plot will show Fallon surrounded by rivals to destroy her, especially by her wicked brother Adam. The romance between Fallon and Liam looks interesting. Blake will leave no stone unturned to reclaim his rights.

See also  Though Alex Trebek is Close to death due to pancreatic Cancer, the Canadian Television Personality says He has No Regrets

Carrington has to face a lot of challenges, as it’s always never been easy for them. Hopefully, the discorded family will come together to resolve issues and be the top billionaire family. The Carrington family has always lived a complexed life.

We are hoping for a good and interesting plot.

AMA 2019 turned out to be romantic outing for Jack Osbourne and her New Love Interest Meg Zany!!

Jack is the son of heavy metal singer Ozzy Osbourne. He has dual citizenship of American and British. He also starred in MTV's reality series The Osbournes, along with his father, mother Sharon, and sister Kelly.He got married to...
Entertainment

Kirstie Alley!! Her Journey From Darkness To Colourful World!!

Kristie, 68 years, made a bold confession on social media. On Twitter, she shared with her fans "vowed to spend the same weekly on flowers that I'd spent on drugs."For u who don’t know much about me, I...
Entertainment

Met Gala 2013 was unfair to Kim and his unborn baby! A Painful Event To Recall For Kim Kardashian!!

After so many years, Kim Kardashian West finally spoke about her emotional breakdown in 2013 during the Met Gala event. She was literally in tears when she was mocked online. At that time, she was heavily pregnant with her first...
EntertainmentTop TrendingWorldCelebrityShow & Movie SeriesHollywoodTv Show