Dwayne Johnson aka The Rock to star as MMA fighter Mark Kerr in a new project: Know everything about this Upcoming Movie!!! 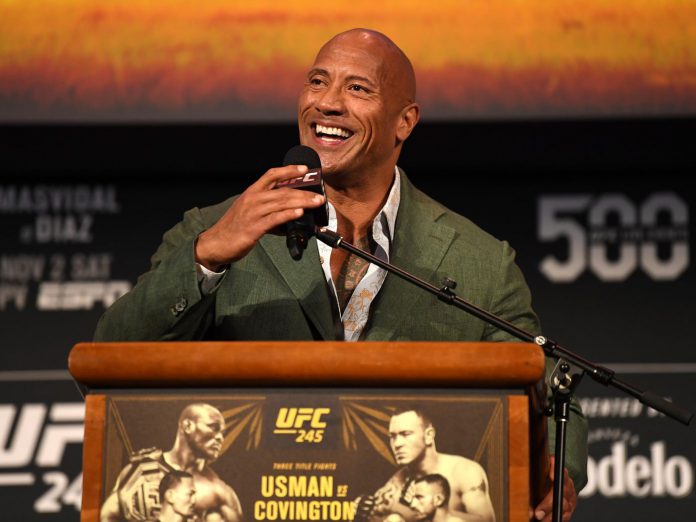 Former World Wrestling Entertainment champion and Hollywood superstar Dwayne Johnson also popular by his stage name “The Rock” announced on Friday, November 1, 2019, that he is going to partner up with his Seven Bucks production company to make a film about the life story of former MMA fighter Mark Kerr.

One can notice Dwayne’s reveal above courtesy of ESPN. Dwayne Johnson who is in New York this weekend to present the new “BMF” belt to the winner at UFC from Madison Square Garden, has been an MMA fan for several years. He said “I have been a fan of MMA for a very, very long time. A fan of these fighters. A fan of these warriors”.

He further told in the interview why he has chosen Mark Kerr. He said that he is proud that he and Seven Bucks Productions are going to make a film about the life of the pioneering founding fathers, ‘The Smashing Machine’ Mark Kerr. He told that the most interesting thing about Kerr is he has achieved so much in his life and was undefeated for a long time.

Kerr is considered as one of the original dominant heavyweights of MMA. The former wrestler has created an identity for himself early into his combat career by winning back to back UFC tournaments and remain undefeated for a long time. He was better known for his name “Smashing Machine”. Though there are no additional details regarding this it is confirmed that the “The Rock” will be playing the role of Kerr.

Previous article
Bella Thorne Criticised for her Halloween Makeup!!! Fans think she is Mocking the Victims of Physical Abuse!!
Next article
Netflix series: The End of the F***ing World; Here’s everything about the Release date, plot and cast of Season 2