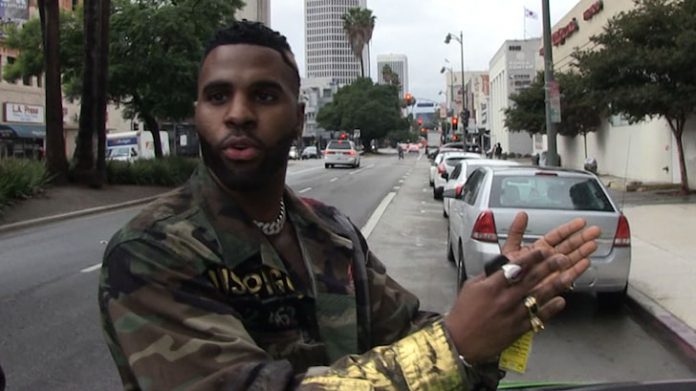 The music artist, Jason Derulo, is all set for his upcoming movie but his form-fitting and all-too revealing costume, during his shoot has got him in dire straits.

The famous Swalla song singer, Jason Derulo, was observed wearing something unusual in his pants which brought him in attention. On being questioned about the same by a fan, the 30-year-old actor claimed that it was simply an anaconda. According to Jason in a recent interview with Andy Cohen on his SiriusXM channel, the CGI artists had to make more modifications than just adding feline features to his face and body. This statement made by Derulo brought Andy in action and there was a short conversation between the two at the show, regarding the filming of Derulo in his tight outfit.

“CGI’d the d–k out?” he finished the question.

Andy clarified because he felt that the costume team airbrushed Jason’s penis out of the ‘Cats’ film. To which Jason confirmed and added that he could see that in the trailer and there wasn’t any of his faults in bringing out the bulge out of his pants.

Us against the world

Earlier this year in November, Derulo, posted a picture of himself on Instagram, that showed him in form-fitting briefs with a serious bulge between his legs. But, the content displayed in the photograph, seemed to be irrelevant, which forced Instagram to pull down his picture. He didn’t accept that and made sure that he was semi-aroused when the picture was snapped.

Previous article
PRINCIPLES OF SUCCESS STARTS WITH THE BASICS AND FINITE AND INFINITE GAMES CAN REDEFINE THE FACT!!!!
Next article
Emma Watson is missing from her new movie’s promotion. Why is she not present in the promotion of Little Women?