ARNOLD SCHWARZENEGGER REVEALS ON JIMMY KIMMEL’S NIGHT SHOW HOW HE SHORTLISTED CHRIS PRATT AS A SUITABLE MATCH FOR HER DAUGHTER KATHERINE! 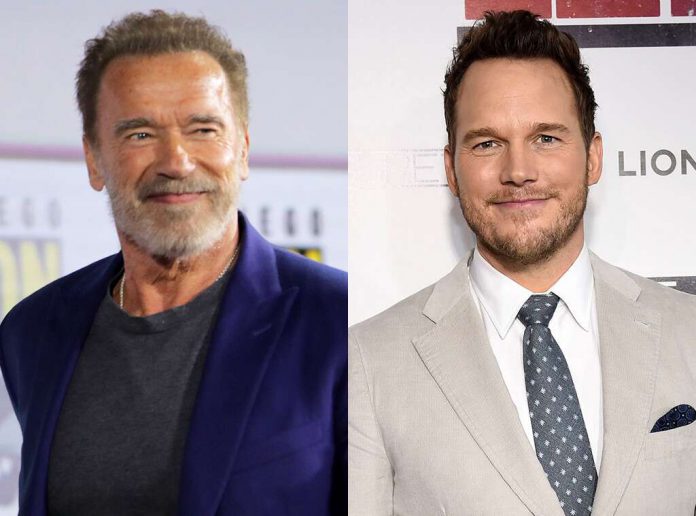 As a concerned father, Arnold Schwarzenegger, too, was worried and excited for his son in law to be.

Katherine Schwarzenegger got married to Chris Pratt six months after their engagement in January.

They wed in an intimate ceremony held at the San Ysidro Ranch in Montecito, California, in June.

On Jimmy Kimmel’s show, Arnold shared his experience of being shocked when his daughter firstly introduced him to Chris.

Arnold was quite astonished about Chris’s personality.

But everyone knows what the results were!

Chris asked Arnold at there first meet that if they both could team up together. But Arnold wanted to do some testings, which he did.

Do you know what were the parameters for Chris to be shortlisted?!

Arnold tested Chris by his gyming skills, whether he is good at lifting, planks, etc. It was quite obvious to happen ’cause Arnold himself was a former bodybuilder.

And finally, at the gym, the 72-year-old decided that Chris is a perfect match for his daughter.

“He’s a strong guy, there are no two ways about it,” he admitted. “I’m very proud of him…When I watched him make these moves in the gym, you know, the incline press specifically did it. Why I wanted him to become my son-in-law, it was the incline press.”

This is all how Chris was successful in moving his father in law’s heart, in getting married to his princess.

Right now, both of them are making movies separately, but surely enough, both will appear in a movie together. And sure it will be an epic moment.

Previous article
Jared Padalecki got arrested for not so good reason and looks like his arrest might affect “Supernatural” shooting!
Next article
In hope of Meeting Ellen, Tiffany professional photographer made this dad and daughter Halloween photo shoot straight out from a nightmare!!