See also  Matthew McConaughey makes his debut on Instagram; His first post has already received a million views
More
HomeEntertainmentArie and Lauren's Relationship Updates; After The Bachelor's, Shows That The Couple...

Arie and Lauren’s Relationship Updates; After The Bachelor’s, Shows That The Couple Has Only Got Stronger Together. 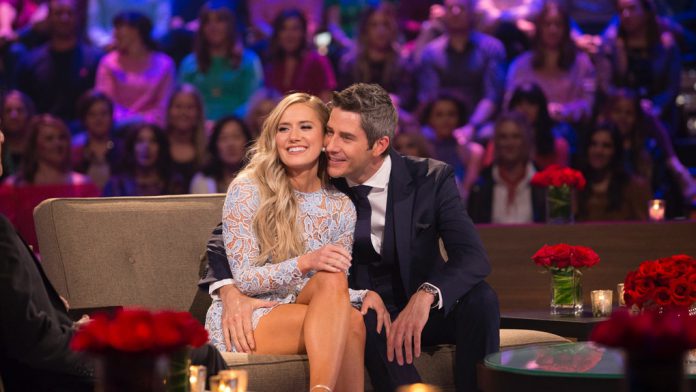 Arie Luyendyk Jr. and Lauren Burnham’s were not the best of matches when they arrived on the sets of Bachelor, but then after the show, their relationship has proven to endure the test of time.

The couple is set to return as guest judges on Listen to Your Heart, a Bachelor series spinoff. The couple is in the second year of marriage after celebrating their first anniversary back in January. The couple will surely be able to give the contestants some good advice, after fighting for their relationship.

In Arie’s season of the bachelor, in the end, he proposed Becca Kufrin instead of Lauren, who ended up being the show’s runner up. But Arie’s decision was completely off and he still had feelings for Lauren. His feelings for Lauren were much stronger than he had first thought and he publicly broke with Becca to reunite with Lauren. The couple got engaged soon after the final and they have certainly got stronger with time.

2 years ago the morning after our dramatic finale before going on @goodmorningamerica. ❤️Hoping @pilot_pete finds his way despite what road it takes to get there. At the end of the day it’s a decision that leads to the rest of your life and however hard and complicated it’s 1000% worth the risk. Don’t know how this season ends but don’t be quick to pass judgment if it isn’t what you at home want or expect from it. So much more to this journey than the viewer sees. Can’t wait to see what happens!

After the show, the couple is making strides in keeping their lives running as both of them now work as real estate agents in Arizona. The couple has proved all their doubters wrong and has no regrets about finding their way back together.

Arie and Lauren are both in touch with the Bachelor’s franchise, a show that brought them together and they hosted the YouTube series, The Bachelor Brunch through Peter’s Season, they’ll surely be able to have some valuable inputs form the Listen to Your Heart contestants.

As for the couple’s future, they are busy with their one-year daughter, Alessi. The couple has their hands full, managing their daughter in this pandemic and the couple makes it a point to document their endeavors on Instagram. Whether it involves adorable videos of their daughters, or Lauren cutting Arie’s hair. The family is quite happy right now, and will definitely look forward to having their budding family grow.

See also  Michael Keaton just turned 69 and Might Be Reprising His Role In The Upcoming Flash Movie After 30 Years! Check out all updates.