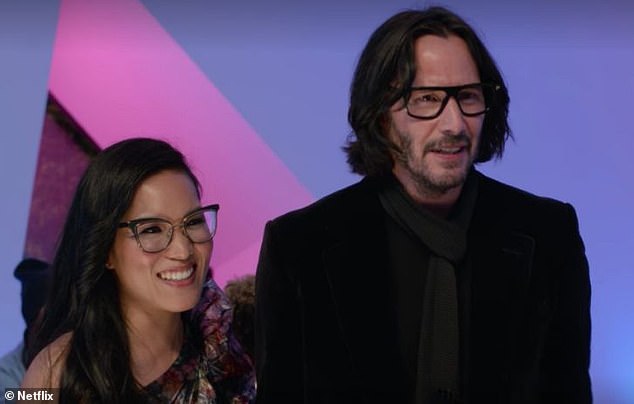 Ali Wong and Keanu Reeves might have had an on-screen relationship running perfectly in their Netflix film, but that didn’t stop Ali Wong from joking about it in her real life.

Ali Wong, 37-years-old, took to Instagram to post a picture of herself along with Keanu Reeves before they went on to attend her Los Angeles premiere at the Wiltern.

The John Wick star and the stand-up comedian both smiled at the camera, and the caption of this picture said that they would never come back together.

As she posed for the picture, Ali Wong had her hair up in a half ponytail while she put on a pair of stylish frames and a small.

Keanu Reeves, 55-years-old, smiled sweetly at the camera as he sported his long dark hair and his beard.

Keanu Reeves and Ali Wong have played each other’s love interests in Netflix’s hit film, Always Be My Maybe to life. In the movie, Keanu Reeves has played a new and exaggerated version of himself as he explores the passionate and brief relationship with Wong’s character.

While Keanu Reeves and Ali Wong have had a romantic life in the movie; however, they both are happily settled in real life too. Ali Wong has been married to her husband, Justin Hakuta, since 2014, and they had a beautiful daughter Mari.

Ali Wong is currently on the road for her Milk and Honey tour from the past two weeks, and there were other famous names that kept steeping out for the occasion like America Ferrera, Daniel Dae Kim, and Mahershala Ali.

Kean Reeves is going to continue his filming for the movie Bill & Ted Face the Music that is announced to be released in 2020; however, the exact date has not been yet announced.

Ali Wong is also going to appear in Birds of Prey, which follows Harley Quinn in one of the leading roles.

An Ode to Jeremy Strong As Kendall Roy on ‘Succession’
Looks like Justin Bieber is interested in meeting Miley Cyrus New Beau Cody Simpson! Double date is Just an excuse? Is there a new music video in Justin’s mind?