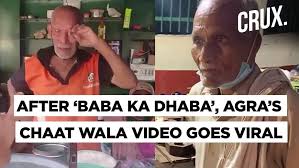 Social media is both a boon as well as a bane. One must know how to use it for their benefits so that they can ensure a great time for themselves on any platform. Not once, but many times have we been led to think that social media is doing something in this new world that it wouldn’t have done otherwise.

“I was 5 & Badami Ji was 3 when we got married in Azamgarh, UP. The only memory I have of the ceremony is of her hair in a braid; she looked like a doll. We thought we were attending a party–we wore new clothes, ate ladoos, performed rituals & went home. We had no idea we’d been married off; so when we met once a year, we’d reunite like old friends. As we grew older, the responsibilities of being ‘pati’ & ‘patni’ became clearer & at 21 Badami Ji came to live with me. Our friendship slipped into love–we’d grown up together & known each other our whole life. We’re luckier than most, but we knew we didn’t want our kids to have the same fate as us. So when I held our daughter for the first time, I decided to leave UP. We moved to Delhi in 1961. Here, I became a fruit seller. I’d get fruits from the mandi & Badami Ji would set up the stall. In the afternoons, Badami Ji would take over; she was a better saleswoman than me! As our family grew to 5, we began selling vegetables–we had our fair share of good & bad days. But we’d keep going for the times when we could afford chai & biscuit from a tapri. My favourite day is Friday though–that’s when Badami Ji makes aloo baingan! We then opened a chai stall. It took a toll on us financially, but Badami Ji had faith in me. I remember asking her, ‘Nahi chala toh?’ She smiled & said, ‘Koi baat nahi, kuch aur karengey!’ I wouldn’t have the courage to do anything without her. She may look small, but she has a strong willpower! So, in 1990, after hitting a half-century, we started Baba Ka Dhaba! Badami Ji does the chopping & I cook. There’s no ‘aadmi ka kaam’ or ‘aurat ka kaam’; 50-50 partners hain hum! But after lockdown, our business tanked; my older son also lost his job. We were barely scraping by–food was going to waste & we had no money to buy vegetables. Lekin waqt hain, badalta rehta hain–out of nowhere, a stranger came & took our video–the next day, we woke up to a line outside! Since then, all news people, company walas & customers have been coming & going. But when you were talking to Badami Ji just now, I overheard her saying, ‘Dekho iss umar mein bhi kitni mehnat karte hain!’Yeh toh best compliment hua na, madamji?"

This is not something we should be surprised over, since it is a common practice seen these days and there are several occasions in which we have noted that there is more benefit to the social media domain than there are harms. Recently, and more such incidents took place that made us surprised and appreciate the great times that we are living in. it is not only tough to believe that such an event ever took place, but also a new way of seeing life these days.

My kanji bada wale uncle 😁 He has been selling kanji badas for almost 40 years and as of today, he is 90 years old. Because of this pandemic he gets to earn only ₹250-₹300 in a day. His stall is in professors colony, Kamla nagar, Agra, near desire Bakery. I’ve been here earlier also and I hope you guys also come here, eat and help him as much as you can. You’ll find him here everyday, from 5:30pm. Also, if you know such places in Agra, DM me. I will try to meet and help them all and will tell everyone about them. All of us should help those in need. Start from your own area, your city and then see how it all changes and let’s try to highlight every story we are able to. #vocalforlocal #vocal #old #viral #supportlocal #foodvideo #viralvideos

Another one! Common Agra, lets help this man too. I think #BabaKaDhaba should be extended to all such local,needy & lovely stalls across India…this should be a mass movement..looking forward to finding more such baba’s & Dhaba’s…#VocalForLocal #SupportLocal #BabaKaDhaba https://t.co/xL5zUIADxZ

What were the two incidents that made us believe in the good of social media once again?

Although not new, such events take place regularly and that is also due to the fact that social media has done us greatly in recent times. The most recent example was that of the Baba ka Dhaba that got famous and the sales of it plummeted due to the social media video that was created after the story and the location of that became public. This was followed by a chaat stall in Agra that got the same amount of limelight.

This is my number, you can donate here for uncle. #BabaKaDhaba #agra #atastetour #help #VocalForLocal #vocal pic.twitter.com/dXAncO6jmj

Henry Cavill is coming back on Netflix as the Geralt of Rivia in The Witcher Season 2! Check out the new look.
President Donald Trump recently claimed on Twitter that he is immune from the Coronavirus! Check out what happened after that.