Aaron Sorkin Revisits History In This New Netflix Movie, The Trial Of The Chicago 7! Check out what we think of this movie. 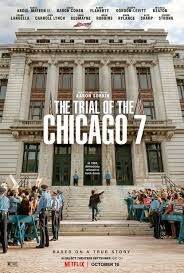 Netflix is no stranger to introducing intriguing movies with historical significance that often acts as a mirror of society. One such newest film titled The Trial Of The Chicago 7 is already creating a buzz amongst movie buffs.

The Trial Of The Chicago 7: Here’s Everything About This New Netflix Release!

The film has managed to gather an impressive star cat under the genius direction of Aaron Sorkin. The story revolves around the sensational events of anti-Vietnam protests during 1968, the aftermath that results in an intense courtroom drama. If you haven’t already witnessed the intense drama yet, here’s the official trailer of the movie.

With an extremely skilled star cast including Eddie Redmayne, Abdul-Mateen II, Joseph Gordon Levitt, viewers once again relive the war of culture, and most importantly of freedom. As seven individuals are standing with severe allegations against them, what will be the result?

All The Actors Shine Bright In This Brand New Aaron Sorkin Movie.

The movie seems to resonate with the current scenario that has made people think about freedom, liberty, and where are these people standing outside the barriers? The movie is a must-watch for viewers, the actors surely shine bright in their respective roles in this courtroom drama.

Change comes with revolution and as these people are standing in the courtroom, the biggest question is, will justice be challenged or compromised? As the trailer ends with a line, the whole world is watching! The is movie should definitely be in you must watch list on Netflix. Aaron Sorkin has done a wonderful job with the story that once shocked the entire country and will once again make people realise that nothing really changed ever since the revolution.

Previous article
David Harbour Compared Hopper To This Iconic Character From Lord Of The Rings! But why? Check it out.
Next article
Salma Hayek Made A Huge Revelation About Her Upcoming Movie, The Hitman’s Wife Bodyguard! Check out the release date, cast, plot and everything else you need to know.