Kelly Clarkson Revealed the Song That Helped Her Understand Her Divorce

Kelly Clarkson has been real about the intense year she’s had. There’s the pandemic, obviously, however, the singer, talk-show host, and mentor on The Voice additionally split from her better half and the dad of her two kids, Brandon Blackstock, in June.

“You can ask anybody that is experienced a separation, I don’t think anybody anticipates it. You know, you see yourself developing old with somebody and afterwards, life has an alternate way,” she disclosed to Hoda Kotb on Today in September.

It should be nothing unexpected that Clarkson has gone to music to help her through her hardest days. Garth Brooks showed up on her show in December, and she let him realize how significant his tune called “The Dance” has been to her. Kelly opened up about her separation, and enlightened Willie concerning how making her new collection has encouraged her to adapt all through the harsh cycle: “I’ve been talking to friends all around that have experienced a divorce. I don’t have a clue how individuals experience that without having some sort of source since it is the most noticeably terrible thing ever for everybody included.” 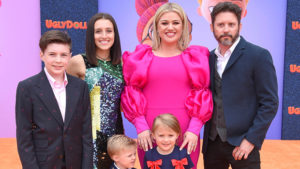 With lyrics like this current, it’s anything but difficult to perceive any reason why it reverberated with Kelly Clarkson and her present circumstance: “It’s my life/It’s better left to risk/I might have missed the torment/But I’da needed to miss/The dance.”

Clarkson said the tune even propelled her to compose a “therapeutic” tune of her own that will be on her next collection, which will definitely wet our eyes.

Recently, Kelly won an Emmy Award for her talk show, The Kelly Clarkson Show, and furthermore as of late filled in for Simon Cowell as an adjudicator on America’s Got Talent. She’ll return as a mentor on The Voice this October