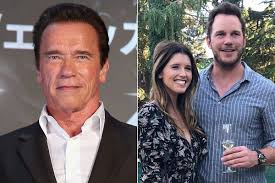 The veteran Hollywood sensation Arnold Schwarzenegger opened up about his relation with his son in law who is none another than Christ Pratt. At an event , Arnold said that he never knew that his daughter would marry an actor. On 21st of December, the 73 year old actor went all along while praising his son in law. He was speaking in Kindergarten Cop Zoom reunion. The host of the event was Yahoo Entertainment.

Arnold who is also the former governor of  California said [sarcastically] that he thought that his daughter would be sick of getting dragged to the sets. Further he said that Chris Pratt is very amazing guy. He also said that he is glad that Pratt is part of their family. Below is the video of Arnold praising Chris a year ago!

Arnold said that having Pratt in their family has brought lot of happiness in their lives.

Arnold further added that he is genuinely happy because Chris has been a wonderful husband to her daughter and is such a great son in law.

He also shared his first time experience of being a grandfather of  Chris and Katherine’s 4 month old daughter.

Chris and Katherine are blessed with a daughter whos name is Lyla. Arnold said that people always said that being a grandfather is very interesting since you have zero responsibility. He said that, it is like you have no contribution but still people congratulate you and gives you all the credit.

He further added that as soon as Katherine gave birth to this beautiful daughter he was blessed with hundreds of gifts.

Chris and Katherine were blessed with a baby girl this year. However, Chris also shares a boy whos name is Jack with his ex wife Anna.

Meghan Markle And Prince Harry Spreads The Holiday Cheer With The Perfect Family Picture!
Mindy Kaling’s festive sweaters has fans wanting one for themselves – here’s the best dupe we found